Popular critic and co-founder of BudgIT, Seun Onigbinde, who pulled down his Twitter account after his appointment by President Muhammadu Buhari as Technical Adviser in the Ministry of Budget and National Planning, has come under heavy fire from Nigerians.

While announcing his acceptance of the appointment, Onigbinde had said, “I have accepted to take up an advisory role underwritten by an international development agency for an initial period of six months.

“I believe that to guard the reputation of BudgIT, I need to take an operational break and make my new position public.

“In a technical advisory role, I shall be supporting the Minister of State for Budget and National Planning, Prince Clem Agba, along the issues of budget reform, development planning, and revenue growth.

“It is similar to a task Joseph Agunbiade (my BudgIT co-founder) and I worked on in 2013-14 under the DFID-FEPAR program for the National Assembly Budget and Research Office.

“I see this as an adventure considering an accepted steep curve on public sector structure.

“I wish to state that I remain loyal to my values — of appreciating the right of every citizen to ask the hard questions; that public resources must be accounted for; and that civic spaces and individual rights must be keenly protected.”

But unimpressed by the move, some notable Nigerians have been firing missiles at Onigbinde, describing his decision to work for the Buhari administration as against what he stands for.

Social commentator, Prof Farooq Kperogi, described Onibginde as an unprincipled opportunist, who only criticised the government in the past because it did not favour him.

In a post on his Twitter handle @farooqkperogi, the professor said, “In Nigeria, there’re two kinds of people: those who defend government because they benefit from it and those who criticise it only because they’re excluded from it, not because they’ve fundamental disagreements with policies.

“This Onigbinde guy belongs to the latter. They’re both unprincipled opportunists.”

Ayo Bankole, an entrepreneur, quoted a tweet attributed to late Pius Adesanmi, who said he will give up on Nigeria the day someone like Onigbinde accepts a government appointment.

Adesanmi’s tweet dated April 2, 2018 reads, “I once said in a lecture that the day I hear that Seun Onigbinde has left BudgIt to be special adviser to one yeye somebody at the state level or in the presidency, is when I will give up on Nigeria and seek asylum in Burkina Faso.”

However, in his own reaction, Joe Abah commended Onigbinde for taking the appointment because in his opinion, “Your country is bigger than Buhari”.

Tweeting at @Drjoeabah, he said, “I am pleased that Seun Onigbinde has been given an appointment by the Federal Government.

“When I tell young people not to be too extreme, they abuse me and label me “Fencist.” 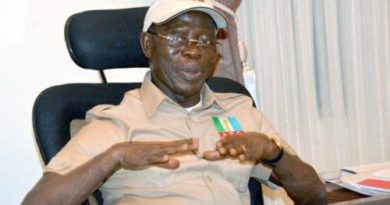 A popular spiritualist, Kwaku Peprah who is also known as Lucifer or Quotation Master says people must stop the old