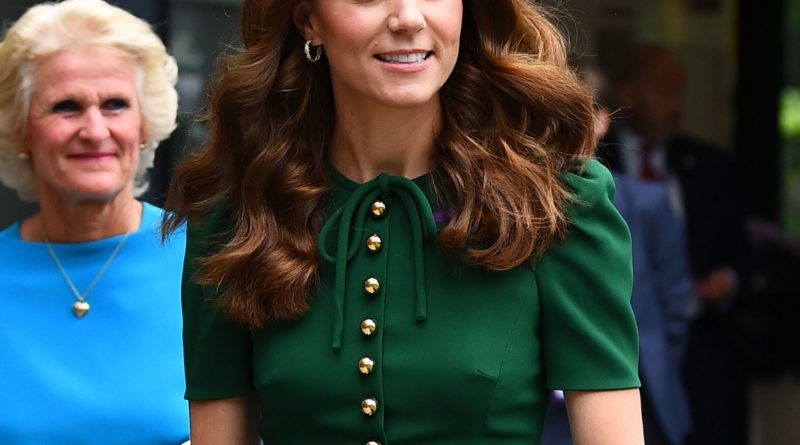 Princess Charlotte was the star this morning at arriving at her first day of school, but her mother Kate Middleton came and made her own style statement. The Duchess of Cambridge wore a gorgeous floral dress and debuted a new hair color on the school ground. As Hello! points out, Kate’s brown hair is now significantly lighter than it was at the beginning of the summer. Honey highlights are clearly visible, either from the sun or salon:

A bit of that color could be seen at Kate’s August event. Her hair is a lighter brown, especially in the sun:

Compare her color now to Wimbledon, which Kate attended in July. Her brown was darker then:

The Duchess of Cambridge has worn her hair in varying shades of brown over the years:

Of course, the big focus of today was Princess Charlotte. Kensington Palace shared a video of her arriving at Thomas’s Battersea with her mother, her dad Prince William, and brother Prince George.

People was told that this was a day Kate’s daughter was really looking forward to. “She can’t wait to be with George at big school,” an insider told People earlier late last month. “She is so excited about it all.”

Charlotte previously attended Willcocks Nursery School in January 2018. Kate took photos of Charlotte on her first day then, which the royal family shared on Instagram. “The Duke and Duchess of Cambridge are very pleased to share two photographs of Princess Charlotte at Kensington Palace this morning,” the Palace wrote. “The images were taken by The Duchess shortly before Princess Charlotte left for her first day of nursery at the Willcocks Nursery School.”

Webcast replay and transcript: Wealth management: Are you truly prepared?