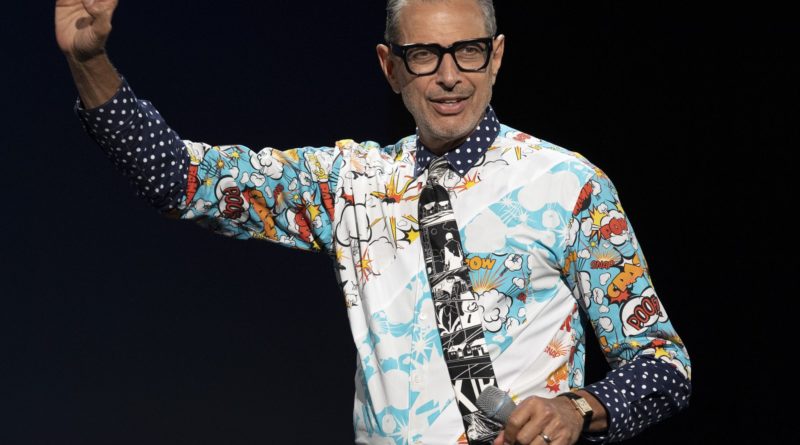 Listen, I am going to deliver some news to you that you desperately need but which you will not understand at all. You will read the words and stare at them as if the letters will rearrange themselves into an order that your brain can compute but that will never happen. Still, you will find your life improved, you mood brightened, your credit score raised, and you cholesterol lowered. “How?” you will mutter at the screen on which you read this? I do not know but we must trust the process. Are you ready? Okay. This weekend, at Southern Decadence, a multi-day debaucherous gay party in New Orleans, quixotic, bemusing angel Jeff Goldblum danced to Normani’s “Motivation” whilst watching a parade from a balcony.

This is literally a Stefon sketch come to life. “Southern Decadence has everything: muffuletta, remixes, poppers, your co-worker from two jobs ago—I think his name was Chris? or Chase?—in a leather harness, and Jeff Goldblum doing the OA dance to Normani.”

Just when you think that Jeff Goldblum, whom scientists agree is the hottest extraterrestrial alien currently residing on Earth, can’t get any more iconic, here’s that toothsome lynx swaying to a beat that literally only he can hear while one of the hottest songs of this or any summer plays in the background. I honestly can’t believe this video exists in reality. When Tom Cruise does the Minority Report thing on me and pulls all my brain activity on to a computer screen, this will be the only thing that is playing. Does it have anything to do with solving crime? No. But I do hope it brightens Tom’s day anyway.

I look at this video and I don’t even know where to begin. It’s like a joy buffet. Am I dead? Is this Heaven? Where else do you expect to find beautiful, buttery bearcat Zaddy Goldblum wearing two different animal prints in the middle of the day? He’s giving you cougar on top and zebra on bottom like some sort of Zoobilee Zoo double entendre.

And, as if the Pride Rock power-clashing wasn’t a bold enough statement, during the entirety of his dance, he keeps one hand in this zebra-striped pocket like a drag king doing a very literal Alanis Morrisette number.

Then there’s the dancing! I want to believe that sylphlike deity Jeff Goldblum could perform all of Normani’s original “Motivation” choreography at a moment’s notice despite the fact that he definitely has never seen the video. I want to believe that Jeff Goldblum could bounce a basketball on the ground, spin around, and booty-pop said basketball out of the frame on any given Sunday. I want to believe that Jeff Goldblum knows that the sight of this would be too powerful and that we would all go ecstatically blind and so he gives us exactly what we can handle and no more. And, apparently, what we can handle is a willowy movement exercise that most strongly calls to mind Tammie Brown on Drag Race dancing to “We Break the Dawn,” a song she was obviously hearing for the very first time at that very moment.

One of the best things about the Jeff Goldblum video, which is perfect from beginning to end, is how it gently pans away after a few seconds, as if the videographer knew that gazing at Jeff Goldblum’s beauty for too long might break us all. It’s just a few seconds of the visual non sequitur of Jeff Goldblum dancing above the masses and then, suddenly, ivy. Art.

I also love that Jeff Goldblum seems completely unaware of the crowd of people gathered below. If you told me there was some sort of force field at the edge of the building blocking Jeff Goldblum’s view like a very extreme Peloton bike, I would believe you. He looks like someone doing sexy aerobics in front of a two-way mirror in a police station. Detective Olivia Benson is on the other side wracking her brain trying to figure out what it all means while Ice-T wanders the streets of Southern Decadence trying to figure out why so many men are wearing leather belts around their chests. “They even have any pants on,” he mutters to himself, “what’s the point of the complicated belt? Oh, hey, there’s Chase! Didn’t he use to work in forensics?”

Are ETFs just for active traders?

What will you gain in your useless talk

This one shock me ooo 🤣🤣

Live at my polling centre

Victory is SURE ... See MoreSee Less

Wishing you the best mama

It's is now or never for the people of Edo Igodomigodo

Victory sure for who, plz?

A vote for apc is a vote for slavery, if you are a slave don't worry

PDP looters will. Cry after the election

The Mayor of the Sekondi-Takoradi Metropolitan Assembly, K.K. Sam died of the novel Coronavirus. This was confirmed by the President,