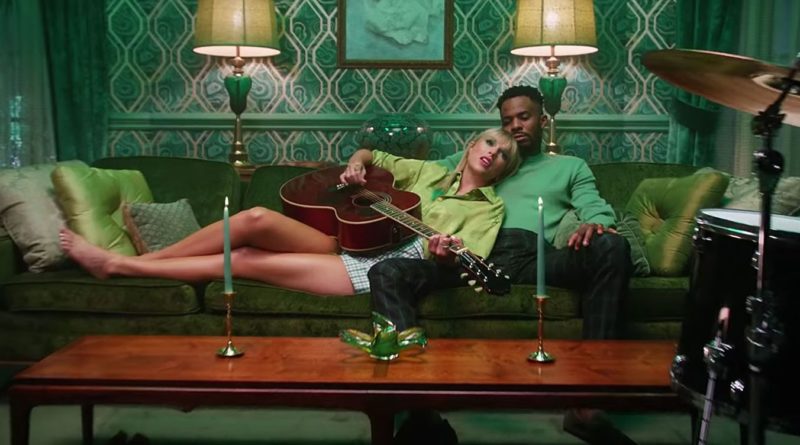 The moment Taylor Swift has been teasing for days is here: the premiere of her “Lover” music video ahead of Lover‘s full album release. Is it Easter egg packed? This is Taylor Swift, so of course. The entire music video, which depicts a love story, is a big easter egg for a 1989 lyric, to start. As Swift explained in her YouTube Live, “This whole video concept came from a lyric from a song on 1989 called ‘You Are In Love.’ This is a song I wrote about two of my best friends who are in love. And so it goes, ‘you two are dancing in a snow globe round and round.’ That line inspired the music video concept for this entire video.”

Watch the video below. There are tons of little easter eggs buried in it:

Swift’s love interest in the video is played by Christian Owens, one of Swift’s dancers she has “performed on stage with for years.” She said he was “amazing…Every night I could see how expressive he is as well as heroic.” He played her love interest when she sang “King of My Heart” on her Reputation World Tour.

Swift is opening the MTV VMAs on Monday, and while her song selection hasn’t been announced, it’ll likely be “Lover” she is performing. Swift will be releasing the rest of her album Lover tonight at midnight.

Swift revealed earlier today that she does plan to re-record all her old material, by the way. She told Robin Roberts on GMA that her old contract with Big Machine Label will allow it starting next year.

“Yeah, that’s true [I’m re-recording some of my old music], and it’s something I’m very excited about doing because my contract says that starting November 2020—so next year—I can record albums 1 through 5 all over again,” she said. “I’m very excited about it. Because I just think that artists deserve to own their work. I just feel very passionately about that. Yeah, it’s next year [I’ll start doing that]. It’s right around the corner. I’m going to be busy. I’m really excited.”

What’s the best strategy for asset allocation in retirement?

How Bloomberg made life worse for the poor in New York

Continuation of showcasing Governor Godwin Obaseki projects across the 18 local government areas. This is Ekpoma UPOJI road very long like that of Okpekpe road in Auchi, Godwin Obaseki tarred it without media noise.

Am using this medium to call on Edo people to support and vote the working Governor Godwin Obaseki to continue with this giant stride development in our state under the umbrella of PDP. ... See MoreSee Less

They yeye Oshio turned his back on this road, clamming it's a federal road and he won't do it....

Let's take a good closer look at this road, does it merit half criteria of a standard road ? Or perhaps is still under construction.

Better minus this road from his projects, because is only granite dey the road

Snap the recent picture of the road

He tried, but is likely not yet complete

NA THE MATTER WE DEY! Obaseki is a Goaaaal ... See MoreSee Less

Old fools dat is not relivant in edo politics

Who is this man?

When you teach person work, you nor dey teach am everything. U see how wicked you are even for old age. Hope You nor go Die for inside Tricks and Fraudulent ways of life, which kind of upbringing this old man go give his children, , , , , e nor go pass Thugs.

Owanle at this ur age u still want to gamble with the life of the younger generation, no way. For supporting oshiomole, oga una fail.

No money for you

Stupid old fool. These are the public fund looters in Edo State. Erewele has never contributed meaningfully to the progress of Edo State. He is well known to me. He is a betrayal!!!!.

Please don't take this old drunkard seriously, And we Esans should thank the executive governor, Obaseki also,for giving our very own brother, our son and a great Leader Hon Sir-Ezehi Magnus-Desmond Igbas has been appointed as SSA to the State Government. Great and eloquent son of Uromi, a very vibrant Honourable and a strong believer of the Ideology of the Esan in developing Uromi.Lets join in praying for, that more appointments like this will come to Esan land.Etsakos had had enjoyed same in days and reigns of their most important dwarf man who Elimin Esan will soon kill that he retired our father Annenih.It's our turn to give our full support to Obaseki to attain the much needed 4+4=8 Ones more Congratulations sir patriotic son of Esanland who holds Esanland in high esteem.

Who is this one?

These are the state criminals!

You are so bright.

Is this beautiful girl real