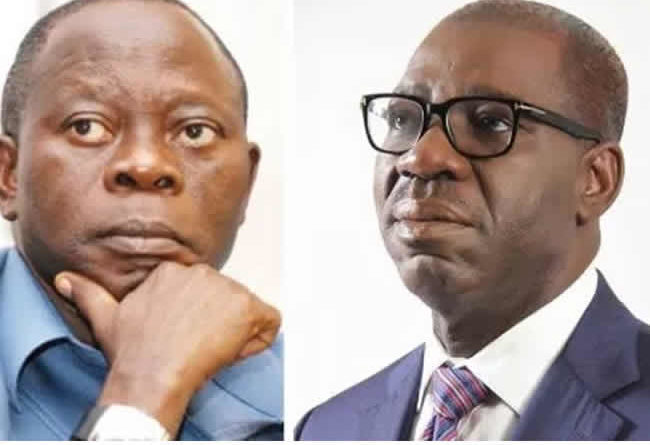 Edo State Governor, Mr. Godwin Obaseki, has disclosed that the cold war between him and his predecessor, Comrade Adams Oshiomhole would soon be over, bringing peace to the ruling All Progressives Congress, APC in the state.

He disclosed that he has met with Oshiomhole and that efforts were being made to resolve issues which he said were created by third parties in the state.

The Governor gave this indication on Monday, while responding to the homily delivered by the Archbishop of Benin City, Augustine Akubueze, during a mass at the St Paul Catholic Church, in Benin City, to mark the 80th birthday of the first executive governor of Edo State, Chief John Odigie Oyegun

He stressed that there were no fundamental issues between them.

“I thank you very much for the remarkable homily. I listened very attentively and I have taken every word in your remark to heart and very seriously. I want to assure you that we are in pursuit of peace and we will have peace in Edo State.

He said the state government, in line with the spirit of Nigeria’s national anthem, will not forget the labour of past heroes, which he said, shall never be in vain.

“Today, we are here to celebrate our own Chief Odigie-Oyegun. On behalf of the people and Government of Edo State, I want to congratulate you on your 80th birthday,” Obaseki said.

The governor announced that the state government has named the soon-to-be-completed Civil Service Training Center after Chief Oyegun, for his contributions to the development of the state and the country at large.

“Therefore, we have decided to name this edifice which will be completed within the next 60 days, by the grace of God, after you. President Muhammadu Buhari will come and commission the academy, with you standing beside him. It will be known as the John Odigie-Oyegun Institute for Public Administration.”

The Institute, according to the Governor, is on “three floors and is made up of large training rooms that will host 220 people. Two halls hold 118 people each. There are seven training halls that will host 58 people each. There is a library, a sick bay, a cafeteria and 12 offices. This facility at any point in time can hold and train a minimum of 900 people. It will be the largest facility for training public servants in Nigeria.”