Self-determination is a universal principle no doubt, but its application is defined within the context of the law, norms and precepts of the state. It has become orthodox to frame this concept narrowly; the fact is, self-determination beyond the remit of the prevailing laws of a country is subversion.

The UN declaration on this subject, which reads: “By virtue of the principle of equal rights and self-determination of peoples enshrined in the Charter of the United Nations, all peoples have the right to freely to determine, without external interference, their political, economic, social and cultural development, and every state has the duty to respect this right in accordance with the provisions of the Charter;” was “principally” in response to peoples or states under colonialism.

However, I admit that its application is more embracing now, following the declaration of principles of international law concerning friendly relations and cooperation among states in accordance with the Charter of the United Nations on 24 October, 1970.

The point is, the UN declaration on self-determination of peoples was originally in the context of decolonisation, and even in an expanded purview, this principle is subject to the laws of the state. In November 2014, a self-determination referendum was held in Catalonia after the endorsement of the parliament, but this bid failed after the Spanish Constitutional Court voided the exercise. A political crisis ensued afterwards, which led to a serious breach of the peace. As a matter of fact, Europe,” the bastion of human rights” was not favourably disposed to the separatist agenda out of fear of the impact on the continent.

It is in this consciousness that I interrogate the declaration of a referendum on self-determination for the southeast by Ohanaeze youth.

This is what the group, which I believe is narrowly going off the deep end, said:

“On the 8th of August, 2019, a referendum shall be held in Abia state, Anambra state, Ebonyi state, Enugu state and Imo state of Nigeria on: Whether the government of Abia, Anambra, Ebonyi, Enugu and Imo states should negotiate with each other with a view to forming a federation of State to be known as South Eastern Region of Eastern Nigeria.”

“Whether the said region should negotiate with the government of Nigeria and the remaining 31 states or any group of states that have also agreed to federate … to achieve autonomy/self-determination for the said region within a federation of Nigeria Constituent Units.”

I think this agenda, if necessary, would have been best achieved through the national assembly. Does the constitution allow for a referendum? Can a socio-cultural group declare a referendum in an entire region? Is it not overreaching pushing an agenda that is clearly in conflict with the constitution?

I believe, it stokes tension unilaterally declaring a referendum on a subject that affects every Nigerian and the state. I would advise this group to proceed with caution in order not to set off a chain of reactions that will cause the cauldron to boil over. Whatever the goal or agenda is; no matter how noble, it is best that it is achieved within the bounds of the constitution.

Also, I think the pursuit of self-determination is a will-o-the-wisp; a waste of time, and unpragmatic; it will only deepen the alienation of the southeast and autograph the reasons for its political marooning within Nigeria. We should be working in consonance as equal owners of the country, and not sectioning ourselves into political purdah.

We – all ethnic nationalities – can negotiate how we want to live within Nigeria without belligerence and threats, and it is better this conversation is had in an unheated atmosphere.

COVID-19: Why Ogun extended lockdown again by one week 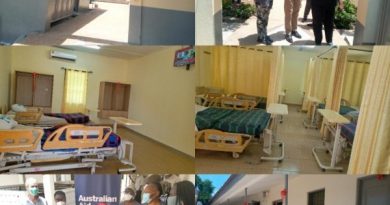