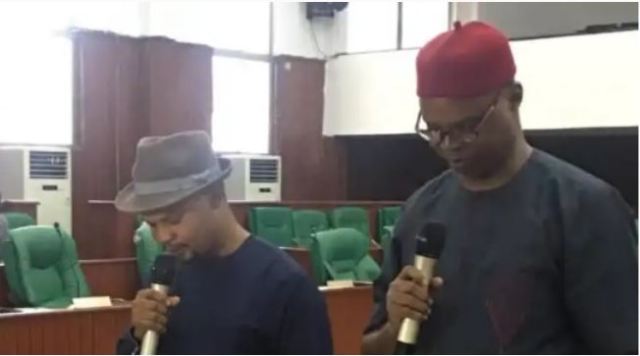 BENIN CITY—THE crisis rocking Edo State House of Assembly over June 17  night inauguration of nine members continued yesterday, as two members from the 15 that have queried the manner of inauguration presented themselves to be sworn in by the Speaker, Mr Frank Okiye.

This brings the number of inaugurated members to 11.

Okiye said: “We cut short our break because some members have concluded their documentation. This was done to show to the world that nobody is being shut out.

“Nobody was shut out. Anybody that completes his documentation in line with extant rules will be sworn-in.”

On threat by Speaker of the Lagos State House of Assembly and  Chairman of Conference of Speakers of State Legislature, Mudashiru Obasa,  that he would not be admitted into the conference unless a proper inauguration was down, Okiye said: “I did not hear from him but I will just laugh. I laugh.”

Meanwhile, Vanguard gathered, yesterday, that the remaining 13 lawmakers-elect were still in Abuja where they had relocated after their hotel was attacked last week and many of them beaten up by suspected thugs.

However, lawyer and human rights activist, Dele Igbinedion, said the seats of the 13 lawmakers could be declared vacant if they fail to attend sitting for 60 days from the day the House was inaugurated.

He said:”The House of Assembly is expected to sit for a period of not less than 180 days in a year. For this, see section 104 of the Constitution. By simple calculation, one third of 180 days is 60.

“My humble submission is that any person elected as a member of the House of Assembly who, without just cause, absents himself from meetings of the House for more than 60 days will be liable to vacate his seat.”

Also,  a chieftain of APC in the state,  Mr. Charles Idahosa, has said the National Chairman of the party, Mr Adams Oshiomhole, was playing the godfather in the politics of Edo State.

According to Idahosa, “Oshiomhole must have been joking when he denied his godfather’s role in Edo State politics.  Oshiomhole brought Governor Godwin Obaseki to us and told us that he was the engine of his administration and today,  Obaseki has lived up to our expectations and he has actually exceeded the expectations of millions of Edo people.

“Oshiomhole chose the deputy governor, Philip Shaibu, he imposed all the commissioners on Obaseki and chose the Secretary to the State Government, Osarodion Ogie. So what is Oshiomhole denying?”

Meanwhile, a new dimension entered the crisis rocking Edo State House of Assembly and APC as threats of recall have been handed down  on lawmakers-elect yet to be inaugurated.

The leadership of APC in Oredo Local Government Area of the state has issued a 48-hour ultimatum to the member representing Oredo East Constituency, Chris Okaeben, to apologise to Governor Obaseki for allegedly smearing his name and his refusal to be inaugurated otherwise, they would commence impeachment process against him.

A communiqué by the chairman of the party in the council, Godswill Alabi said: “If ever Okaeben possessed any good quality to be our representative in the past, his behaviour in the last few months had shown that he has lost every sense of discipline and decorum and we have decided to begin the process of his recall to avoid sending someone to the Assembly who will soil the hardened reputation and integrity of this constituency.”

Some Yoruba leaders treat members from S/South, others as conquered people —Okorode

It was an evening of music, dance and unexpected reunion as the Black Diamond of Africa, Wande Coal celebrates his