LONDON, June 18 (Reuters) – Angolan and Nigerian crude continued to clear slowly amid squeezed margins in Europe and Asia on Tuesday, as buyers expected prices to continue to slide after Angola’s initial August programme was released and Nigerian programmes are expected within days.

* State oil company Sonangol published its preliminary programme of 45 cargoes for August on Monday, up by one compared to July.

* Sellers expect significant discounts compared to initial price offerings the previous month, which left sellers with the first overhang of 2019.

* Around half a dozen cargoes were heard to remain for July-loading despite offers coming down almost daily.

* It was unclear whether China’s Unipec managed to sell its assigned cargo of new grade Mostarda, one of the month’s hardest-hid grades, which was marked down from a premium of $1.20 to dated Brent in late May to minus 80 cents last week.

* At least 25 cargoes of Nigerian crude remained for July loading as the preliminary August loading programmes were expected in the coming days.

* Offers for major grades Bonny Light and Qua Iboe were heard to have slid, with Vitol heard offering a cargo of Qua at $2.40 above dated Brent, down from as much as $4.00 earlier in the month.

* Some European gasoline cracks continue to be under pressure and are seen to be undeperforming for the summer season, but large purchases in Northwest Europe signal interest.

* Uruguay’s ANCAP is running a tender set to close on Tuesday for end-September delivery.

* U.S. President Donald Trump said he would meet with Chinese President Xi Jinping at the G20 summit later this month, and that trade talks between the two countries were set to restart ahead of time.

* If, despite its firm denials, Iran was behind attacks on two oil tankers in the Gulf last week and a further four last month, they represent a calibrated yet risky pushback against a U.S. sanctions squeeze, regional experts say.

* U.S. oil output from seven major shale formations is expected to rise by about 70,000 barrels per day (bpd) in July to a record 8.52 million bpd, the U.S. EIA said. (Reporting by Noah Browning; editing by David Evans) )) 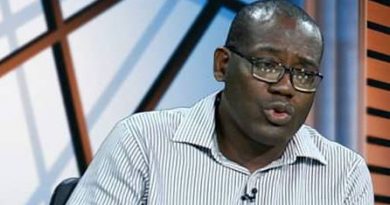 Now The ‘Lazy’ Youths Have Arisen By Achike Chude

The Greater Accra Regional Minister, Ishmael Ashitey has appealed to corporate entities and financial institutions to assist the Ga Traditional