In recent years, personality psychologists have refined our understanding of personality and have reached a working consensus that personality traits can be comprehensively conceptualized and reliably measured by observing the dealings of people in their public and private lives, but specifically for the focus of this piece, their political lives.

We must understand that democracy is a contact sport. It’s a battle that throws you against one another. Everyone gets bruises: the losers and even the winners. So it is disappointing the kind of bickering we see today across our polity during elections. It is not only unproductive but juvenile and cowardly.

Even though political issues and personalities are the major domains in politics, we must understand that if you don’t have the will and patriotism to focus on the main issues and ideas relevant to infrastructural and socioeconomic development as opposed to tearing down individuals for puerile and selfish reasons, you do not deserve to be considered let alone be on the field. Pulling down the personality of Governor Yahaya Bello on the basis on ethnicity, hammering on where he comes from and his people, and not on the basis of the performance and failures of his administration in the quest to move Kogi state forward socioeconomically is just unnecessary vituperation that does not serve the interests of the good people of Kogi state.

We want leaders who are brave enough to focus on ideas and not ad hominem shenanigans. We want leaders who are willing to say, “Governor Yahaya Bello has not done well here. He ought to do better. We deserve better governance. I do not like what Bello stands for in this particular area, but I do not hate him on a personal basis and neither should you.” We need more Kogites who engage in these kinds of circumspect arguments/debates for the sake of our democracy. Just ideas against ideas, let us all fight it out, and if we lose, we returned to the table with better ideas.

A rumble can be quenched by a fair fight. We have the will to engage in fair and productive debates with the aim of improving our polity and strengthening our democracy. The question is: are we ready to start fighting fair for the sake of our democracy? For the collective interest of the people? Are we ready to engage with the intentions of proffering solutions to our common socioeconomic problems?

Unpaid salaries/percentage salaries have been the major controversy in Kogi state. The cries of suffering workers, pensioners (and their families) whose entitlements have been delayed/unpaid are loud enough to hear from wherever you are in the world. And on the side the state government, the overzealous aids gloats when salaries are paid. To be candid, payment of salaries is not counted as an achievement of any responsible administration, as this is a mere fulfilment of one of its primary responsibilities. It cannot be passed off as an achievement on the scale of performance.

It is expedient at this point, as we approach the November 2019 Gubernatorial Election, that Governor Yahaya Bello do the needful by making public the funds received from FEC allocations, bailouts, Internally Generated Revenue (IGR) so far and explicitly explain how they were expended; and also continue a monthly disclosure of how funds that come in are expanded for the sake of transparency. Kogi State citizens need access to accurate information in order to informally appraise the performance of the government in relation to available resources. They need to know exactly what the government has done and is doing to improve security, healthcare, infrastructure, education, etc.

Youths and leaders of our today and tomorrow are being brainwashed, offered peanuts and recruited as political mercenaries to engage in violence; killing and visiting mayhem on their own kinsmen and fellow citizens at the behest of selfish politicians. These are youths that are supposed to employ their youthful energy into contributing positively to the development of Kogi State, if not now, in the near future.

When a government has failed in generating the ideas and innovations needed to solve problems; to create employment for its grossly unemployed population and improve the overall economy of the state, and then win the heart of the people for another election, it resorts to despicable tactics of employing thuggery, vote buying and intimidation of the opposition and the electorates. This leads to diversion of funds meant to develop the state and improve the lives of the citizens to procuring elections, leaving the people unavoidably impoverished and the political thugs to wreak violence that usually leads to loss of innocent lives and properties.

President Muhammadu Buhari as a man of honor and father of every citizen of Nigeria should empathize with the citizens of Kogi state and use his power and goodwill to lean on the powers that be in Kogi to avert the looming danger, and improve governance and invariably the lives of the common Kogi citizen. 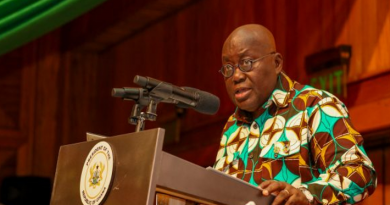 The School of Public Health at the University of Ghana, Legon, on Thursday, February 4, 2021, held an inception workshop