When President Muhammadu Buhari is sworn in on Wednesday for a second consecutive democratic term in office, it will be a low-key affair: no pomp or pageantry, no retinue of world leaders. In practice, this is due to Buhari’s admittedly smart decision to officially recognise June 12 — rather than May 29 — as Nigeria’s Democracy Day in honour of MKO Abiola, the acclaimed winner of the June 12, 1993 presidential election, who was denied his mandate by military dictator Ibrahim Babangida, and eventually died on the very last day of his four years in detention.

In theory, however, this is a foretelling of what to expect of Buhari’s next four years: they will be economically drab, ideologically uneventful and nothing distinct from the past four. Low-key inauguration, probably lower-key exit in 2023. Buhari himself implicitly admitted this much recently. In terms of the most important three of Buhari’s campaign promises, what can Nigerians expect?

Buhari earned a sizeable fraction of his early-office goodwill from hunting corrupt former public office holders, most notably former National Security Adviser Sambo Dasuki, accused of presiding over the embezzlement of $2.1bn arms fund. Ordinarily, this ought to continue in his second term. But, having largely localised the anti-corruption war to opposition politicians, Buhari has practically arrested or intimidated every notable name on his list. There are only few of such politicians left to go after, hence the war against corruption will lose steam in Buhari’s second term. It would have continued were Buhari as open to prosecuting corrupt elements in his own camp, but he has proven himself dead to that possibility and he won’t suddenly change.

Only on Sunday, First Lady Aisha Buhari impugned the $16m expended on mosquito nets under the Social Investment Programme (SIP) coordinated by presidential aide Maryam Uwais. The nets are nowhere to be found, she lamented, insisting that the promised distribution of $14 to Nigeria’s poorest hadn’t reached the North despite the allocation of N500bn for the purpose. The matter, though, doesn’t interest Buhari since his aide is the alleged villain. Within the next four years, expect many more instances of the President turning a blind eye to corruption and inefficiency among his appointees.

Some credit: Boko Haram may not have been “technically defeated” as Buhari and Army Chief Tukur Buratai often claim, but the insurgents are clearly less effective today than four years ago. The bomb attacks and large-scale kidnaps once the signature of the insurgents have reduced in scale and frequency. However, as long the deadly attacks, such as last week’s killing of 35 soldiers, can still happen, Buhari still has his work cut out.

In his second term, there will be slightly more progress. The extent of this progress will be determined by the synergy he is able to forge with the incoming legislature; his fractious relationship with the outgoing set frustrated many of his moves, including a plan to secure $1 billion from the Excess Crude Account (ECA) to bolster the anti-terrorism war.

As the last two years have shown, Boko Haram is probably no longer the highest-ranking security concern before the Nigerian government, but the rapidly rising cases of banditry and kidnapping for ransom in all geopolitical zones of the country, including federal capital Abuja, as well as the unresolved herdsmen attacks. The slight progress to be recorded in the war against insurgency will be evened out by a worsening of these latest security challenges — because Buhari will not change his approach. He ignored intense calls to sack the Police supremo Ibrahim Idris after flouting presidential orders during the peak of herdsmen killings, and bizarrely defended successor Abubakar Adamu with a ‘losing weight’ comment that earned him public opprobrium. Buhari is not about to ditch his blind loyalty to his appointees; he will never shake up the security architecture regardless of the performance of his security chiefs. As long as the security chiefs are really under no pressure to curtail insecurity to keep their jobs, Nigeria’s security challenges will not lessen over the next four years.

Nigeria slipped into recession a year into Buhari’s reign and exited it after another year. Just one more year later and the apex bank warned the exit was under threat, followed by a similar warning just last month by Chairman of the Nigerian Governors Forum, AbdulAziz Yari. The problem is that despite Buhari’s pre-election promises to diversify the economy, the Nigerian economy is still completely oil-dependent. The concerns about a potential return to recession stem from recent fall in global oil prices. Meanwhile, power — the single biggest impediment to the survival of small-scale businesses — hasn’t improved in Buhari’s first four years.

By 2023, would Buhari have weaned Nigeria off its over-reliance on oil? Probably not. This is because the president neither has the right answers, nor the right people to do so. The latter is evidenced, for instance, by the calibre of people running the central bank, who were exposed two weeks ago by a leaked audio discussing how to cook the books to cover up the mismanagement N500bn from the treasury. The CBN’s rebuttal is all suspect; but having been rewarded with a second term of five years in office days after the scandal was reported, Godwin Emefiele, the bank’s chief, is set to continue this administration’s reign of economic indiscipline and artificial balance sheets. And the worst news: after four years, Buhari is “still thinking”.

Asked during a strange interview with state media NTA on Monday night about his thoughts on solving the new threat of kidnapping for ransom, Buhari said he was “still thinking”. “I am thinking of what happened between 1999 and 2014. I suspect a lot of things went wrong, including accountability in the efficiency of the military and law enforcement agencies.”

Overall, that is the kind of Nigeria to expect in Buhari’s next four years — a country where a returning President begins his second term “still thinking” after four long years in the saddle. So, Nigeria’s economic, security and corruption challenges will, sadly, still be there in 2023. Hopefully, they aren’t too grand for the next President to attempt solving.

This piece was first published by Al Jazeera.

Soyombo, former Editor of the TheCable and the International Centre for Investigative Reporting (ICIR), tweets @fisayosoyombo 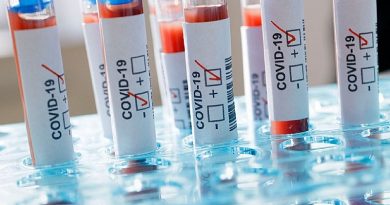 The Ghana Covid-19 Private Sector Fund has launched a crowdfunding initiative to raise money to complete its flagship project, the