(Adds comment from WHO spokesman on CAR cases, Iran sample)

GENEVA, May 28 (Reuters) – Africa could be declared free of endemic “wild” polio early next year if a strain last seen in Nigeria almost three years ago does not resurface, the World Health Organization’s Africa director said on Tuesday.

Africa’s last case of wild polio was recorded in Nigeria in August 2016. The country can now begin the months of paperwork needed before declaring that the virus is no longer circulating there, WHO Africa Regional Director Matshidiso Moeti told Reuters.

“We are hopeful that the way things are going, sometime early next year it might be possible,” Moeti said.

There is no cure for polio, which attacks the nervous system and can cause irreversible paralysis within hours of infection. Children under five are the most vulnerable, but there is a vaccine which prevents the disease.

However, traces of the vaccine used against “wild” polio are excreted by people who have been vaccinated, and in places with poor vaccine coverage and poor sanitation, that can cause outbreaks of “vaccine-derived” polio.

The risk of vaccine-derived polio can be avoided by switching from using live oral polio vaccines (OPV) – which are highly effective, cheap and easy to deliver but contain live virus – to “inactivated” vaccines (IPV), which are not effective for fighting the wild type but contain no live virus.

Use of OPV is being scaled down in a phased manner as countries eliminate circulating wild polio virus strains. If Africa is declared free of the wild virus, health officials will be able to switch to the inactive vaccine, removing the risk of more vaccine-derived cases.

“That’s the plan, that’s the hope,” Moeti said, adding that she was cautiously optimistic.

Wild polio still circulated in Pakistan and Afghanistan, and an environmental sample was found in sewage in Iran earlier this month, but all recent African cases have been “vaccine-derived” polio.

The WHO said on Tuesday that two more suspected cases of the disease had been reported in Central African Republic, which would be the 11th and 12th cases in Africa this year.

Oliver Rosenbauer, a WHO spokesman for polio eradication, said that although the two children involved were paralysed, it was not yet confirmed that they had polio. (Reporting by Tom Miles; Editing by Ed Osmond and Dan Grebler) 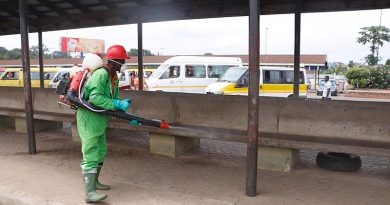