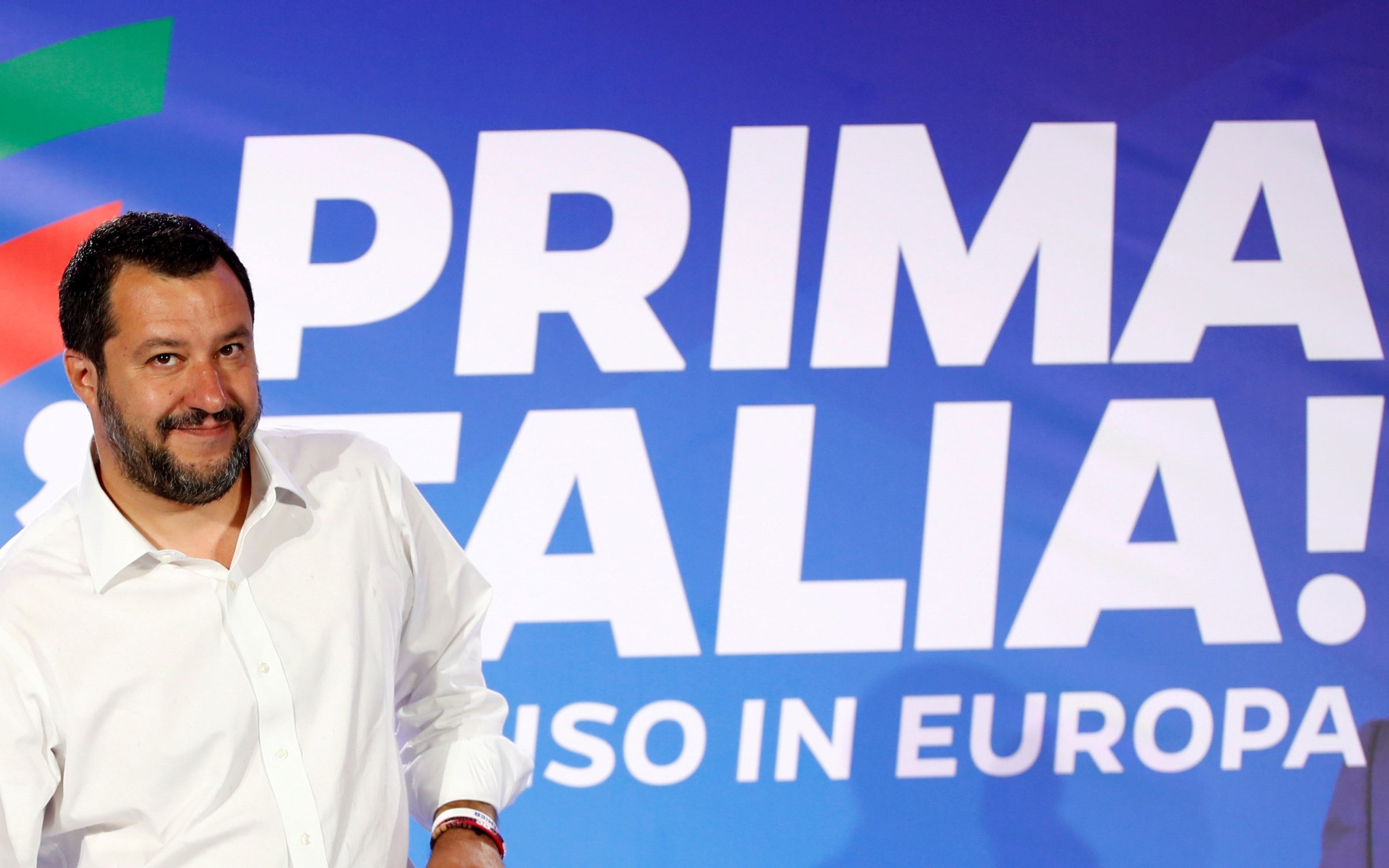 Buoyed by his party’s resounding success in the European elections, Matteo Salvini threw down the gauntlet with Brussels on Tuesday, demanding that the EU relax its spending rules for member states.

The deputy prime minister, whose League party emerged as by far the strongest political force with 34% of the vote, said he was determined to ramp up spending on infrastructure and tax cuts, in comments which alarmed the financial markets.

The spending plans are likely to raise Italy’s deficit and herald a showdown with the European Commission, which is already concerned about the country’s huge debt levels.

Italy’s debt equates to 132% of the country’s GDP – far above the 60% ceiling set by Brussels and the highest debt level in the EU after Greece.

Mr Salvini laid down the challenge during a Facebook Live broadcast in which he spoke directly into his mobile phone while pacing the roof of the Italian interior ministry.

Under a blue sky flecked with clouds, he spoke fluently and without a script for nearly half an hour, railing against EU-imposed austerity policies.

Since taking office last June, the hard-Right leader has shown himself to be a genius in connecting with ordinary people on social media, using Facebook Live to deliver chatty, man-of-the-people addresses which are watched and commented on by tens of thousands of Italians.

The results of the European elections should send a strong message of change to Brussels, he said.

The Italian government has set aside €30 billion to pay for the first stage of a two-tier flat tax system that will help families earning less than €50,000 a year.

“Our priority is to reduce taxes,” he said. “This is about the right of the Italian government to lower taxes for Italian families and workers.”

If Italians had more money in their pockets to spend, the economy would receive a kick-start and the national debt would be reduced, he claimed.

EU spending limits are “old and obsolete,” he said. “We need to escape from this cage. The vote on Sunday was a huge demand for change.”

He called for an EU conference to discuss job creation, investment, economic growth and the role of the European Central Bank.

Mr Salvini’s defiant stance came amid reports that Brussels is preparing to sanction Italy over its debt levels and could impose a massive financial penalty of €3.5 billion.

The European Commission is expected to send Italy a letter on Wednesday asking for clarification on how the debt is being managed.

Mr Salvini mocked such notices as “little letters” and said he would ignore them.

He claimed the Italian economy was in good shape, despite the fact that growth this year is forecast to be just 0.2%.

Pierre Moscovici, the EU Commissioner for Economic and Financial Affairs, confirmed that a letter was on its way.

“I am going to exchange views with the Italian government on additional measures that might be required in order for them to be compliant with the rules,’’ he said on Tuesday at a conference near Lisbon. “It’s quite likely that we will have an exchange of letters.”

Any discussion about fining Italy could come next week as part of a routine budget monitoring process carried out by the EU.

It would significantly up the ante in the confrontation between Brussels and Italy’s populist coalition.

In his Facebook address, Mr Salvini railed against critics in Italy who, he said, characterise League voters as “Fascists, racists and Nazis.”

He gleefully recited the share of the vote his party took in each of Italy’s 20 regions, from 49% in the northern region of Veneto to 42% in neighbouring Friuli-Venezia Giulia.

The party’s gains in southern regions were much more modest, hovering around 20-25%, but still significant given that for decades the League characterised southerners as lazy, sponging “terroni” or peasants.

Road Accidents Killed 78 In Western Region From January To September