PARIS, May 28 (Reuters) – West African states fighting Islamist militancy in the region should not take France’s military presence for granted because Paris will not be there forever, Foreign Minister Jean-Yves Le Drian said on Tuesday.

The Sahel region is suffering from a spike of violence from militant groups linked to al Qaeda and Islamic State, highlighting the difficulty international partners face in restoring regional stability.

The northern region of Burkina Faso, bordering Mali and Niger, has been especially hard hit in recent months, while spiralling ethnic conflicts have also added to the instability.

“The authorities of the countries in the Sahel should not stay in the comfort zone of thinking Barkhane (French forces) is behind them,” Le Drian told the parliamentary foreign affairs committee.

“It’s a temptation, (but) progressively what needs to be said is that the security of Africans will be ensured by Africans. The aim isn’t for Barkhane to stay there for an eternity.”

France, the former colonial power in the region, intervened in Mali in 2013 to drive out Islamist militants who had occupied the north. It has since kept about 4,500 troops in the region as part of Barkhane counter-terrorism operations.

Led by Paris, Western powers have provided funding to a regional force made up of soldiers from Mali, Niger, Burkina Faso, Chad and Mauritania to combat jihadists.

But the so-called G5 force has been hobbled by delays in disbursing the money and poor coordination between the five countries while insecurity has escalated.

“The joint force must progressively assume its responsibilities. Barkhane can’t do everything. The baton must be taken by the countries concerned. It’s happening , but not fast enough,” Le Drian said.

His comments were a rare criticism of the Sahel powers. It shows a growing frustration from France as the violence has taken new dimensions in recent months with repeated Islamist attacks and communal clashes especially in Mali.

The Malian authorities have also come under fire for failing to disarm militias or beat back Islamist insurgents, who have been capitalising on the ethnic violence to recruit new members and extend their reach in the Sahel.

Le Drian also said that the United Nations MINUSMA peacekeeping mission based in Mali since 2013 and which includes about 15,000 soldiers and police, would face a test next month when its mandate is due to be renewed.

The United States said in March it had failed to deliver peace and the Security Council should consider a major drawdown.

“There is pressure from U.S. that wants to reduce costs on peacekeeping forces and could convince some actors (to curb the mission),” Le Drian said. (Reporting by John Irish; Editing by Alison Williams) 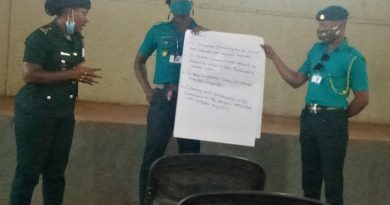