YAOUNDE, May 23 (Thomson Reuters Foundation) – From delivering a TED talk in a tutu to coming out in a country where homosexuality is deeply taboo, Binyavanga Wainaina was a champion of the LGBT+ cause in Africa, campaigners said as they paid tribute to the Kenyan writer, who died this week aged 48.

Many praised the openly gay author, essayist and campaigner as a role model who challenged widespread prejudices and emboldened young LGBT+ Africans to be open about who they were.

“I think Wainaina is the first African gay professional writer, and someone of such a high standing in society, that has come out as openly gay,” said Clare Byarugaba, a human rights activist in Uganda.

“It’s a commonly held belief that you can’t amount to anything if you’re LGBT,” said Byarugaba, who works with the independent human rights group Chapter Four Uganda.

“I can give them as an example and say, here’s one person, who is African, Kenyan, East African who is gay and accomplished, and recognized all over the world and has made it within his craft – and you can also make it like him.”

Hajia Yariya, a gay woman in Ghana – where LGBT+ people still face discrimination – said reading an interview in an African newspaper in which Wainaina said being a gay African man was not a big deal had given her “goosebumps”.

“I became very proud of who I am and I admired his fearless being a lot from that day onwards,” she said.

“I can boldly say that he encourages the LGBTQI people in every part of Africa, especially me, because reading his article created a shift in my mind and whole being as a queer woman,” she added.

Wainaina came out as gay in 2014 – a major step in Kenya, where homosexuality remains taboo in many circles and gay sex is illegal.

Kenya’s Supreme Court is due to rule later on Friday on a challenge to that law, which campaigners say violates the country’s progressive 2010 constitution guaranteeing equality, dignity and privacy for all citizens.

Many Christian and Muslim groups support the law, however, and the attorney general has argued decriminalizing gay sex could lead to legalising same-sex marriage.

Fellow author and friend Frankie Edozien said Wainaina was “a beacon of light” who “was not going to cede his right to be an African and a gay African anywhere on the continent”.

That included the famous TED talk – delivered in a lilac jacket and bright pink tutu – in 2015, the year after he came out.

“If people like him were silent, what is then the hope for the baker, the tailor, the mechanic who is LGBTQ out there?” the Nigerian-American author told the Thomson Reuters Foundation by phone from New York.

Same-sex acts are illegal in 32 African countries and Edozien said intimidation, fear of arrest and stress had led to a high incidence of mental health problems among LGBT+ Africans.

“We are having a very, very hard issue with mental health issues, suicide, attempted suicide,” he said. 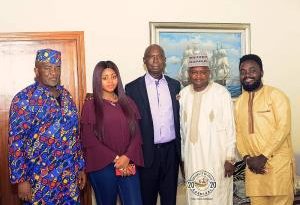