HEADS UP. I’m about to ruin your life! I’m not even sorry! Always Be My Maybe is a romantic comedy forthcoming from Netflix, and it’s a big deal because it’s one of the first mainstream American rom-coms (hi, Crazy Rich Asians) with two Asian-American leads: Sasha (Baby Cobra comedian Ali Wong) and Marcus (Fresh Off the Boat‘s Randall Park). I’m psyched!

The trailer just dropped today, and it’s full of Wong’s uproarious facial expressions and Park’s puppyish charm. Sasha and Marcus grow up together as best friends, but after they sleep together as teenagers (in Marcus’ Corolla, no less), things get extremely awkward and weird. Fast forward: Sasha is a high-profile chef about to open a brand new restaurant and marry Brandon Choi (Daniel Dae Kim!!!!!), while Marcus still has…the same car they did the deed in, and has stuck around in their hometown.

Always Be My Maybe promises to be a lot of fun and just the thing for a cozy night on the couch. But.

The trailer has a surprise for you. It’s a better gift than you’ve ever been given. Even you couldn’t come up with such an incredible present for yourself. Keanu Reeves has a minor part in the film, but honestly, it’s major. Just as Sasha and Marcus cross paths again as adults, in comes the John Wick juiciness, who duly sweeps Sasha into his whiskery sexual embrace.

I’m lying down. I may have to request a lying-down desk at work, because I will be lying down for the foreseeable future. It’s so tasty. Here is the conversation between Sasha and Keanu’s character:

“I missed your flesh.”

“I missed your thighs.”

“I missed your beard scratching my thighs.”

“I missed your taste.”

Is this a documentary? This is exactly how I imagine it would be like to have a relationship with Keanu Reeves. I love representation!!!!!!!!

Always Be My Maybe is out on Netflix and in selected theaters on May 31.

Cardi B Says She ‘Can’t Even Be Sexy in Peace’ When Her Toddler, Kulture, Crashes Her Video Selfie Moment 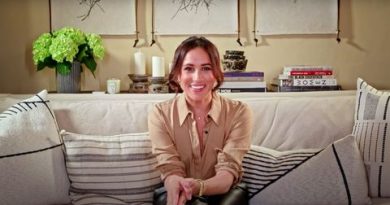