LONDON, May 13 (Reuters) – Angolan cargoes for June had just about sold out by Monday, as the programme for July was awaited by the end of the week with high offering prices again expected amid tightness in global physical markets.

* The Angolan programme was expected on Wednesday or shortly after, with traders keen to see if maintenance was completed on two main streams which made the June programme unusually short.

* Traders believe prices will meet or exceed offerings for June, which for most grades reached all-time highs.

* U.S. sanctions on Iran and Venezuela have driven up demand for relatively heavy Angolan grades likes Dalia and Saturno, but lighter grades are also set to maintain or even increase the rise of about 50 cents compared to dated Brent that they experienced in June versus the month before.

* Chinese demand for Angolan was seen rising each month, as it looks set to comply with sanctions on Iran despite being its top customer and despite the deterioration in trade talks with Washington over the weekend.

* Demand from Western buyers was also mounting amid high gas cracks in Europe and the onset of summer driving in the United States.

* At least 20 cargoes of June loading crude offered at relatively elevated prices struggled to find buyers, as likely customers in Europe sought cheaper barrels closer afield in the Mediterranean and from Russia.

* A force majeure on the Amenam stream and Bonny Light streams continued to cause loading delays.

* Major buyer India was heard not to have significantly stepped up purchases despite having been Iran’s number two customer.

* Crude oil markets in Europe and West Africa are gaining support from unplanned Russian, Iranian and North Sea supply losses, and analysts say Brent futures have yet to fully reflect this.

* Oil production spare capacity could fall to under one percent of global oil demand by the end of the year if OPEC compensates for falling production from Iran and Venezuela, leaving oil prices exposed to sharp swings in the event of unplanned outages, analysts say. (Reporting by Noah Browning; Editing by Mark Potter) )) 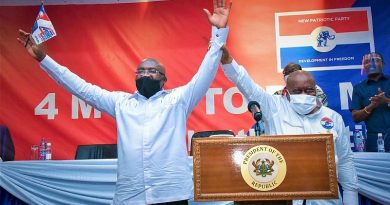 Former President John Dramani Mahama has filed an application for stay of proceedings of the 2020 Election Petition. He wants