In January 2012, the BBC asked in a trenchant report, “Is Nigeria on the brink?” But today, the question that should be asked by Nigerians with modicum of common sense should be “When will Nigeria break up?” Buhari’s second term kicks off officially May 29. But a carryover anarchy from his first term provides the necessary ingredients and of course invitation to Nigeria’s disintegration.
There’s no hope for the three separate, hostile, and unequal regions forcibly fused together by the Brits to exit as one nation. Majority of Nigerians believe the best and lasting solution after 58 years of crises, violence, insecurity, poverty, and blind leadership is for Yorubas, Igbos, and Hausa-Fulanis to go their separate ways.

Let the words sink in. Nigeria is coming apart. 180 million people are without regular and steady power. No roads. No treated water. Hunger is prevalent. Food is scarce and expensive. Salaries not paid. Ritual killings for money. Unemployment, poverty, delayed and denied justice, corruption, nepotism, kidnapping, abduction, armed robbery, failed education system, comatose healthcare system, insecurity, hopelessness, fear of tomorrow, and many more, are the trademarks of Buhari administration that will hasten the break up of Nigeria before 2023.

Deafening silence from the ruling class of defiant rogues, looters, thieves, plunderers, wreckers, leeches, and parasites, has reached its crescendo. Despair is slowly uniting Mumu citizens against their oppressors as they comfort each other.
Thinking about Nigeria is suicidal. How can one fully express in graphic words that could convey in any way, the overwhelming sense of constant pain, horrible uncertainty, fear of tomorrow, fury of wasted lives through epidemic of manufactured evils? The fear of death is an eternal companion for Nigerians in these evil times in the unlivable nation.

As Buhari struggles to figure out the way forward out of thicket of unfulfilled promises and dashed hopes, seems there is a stay of execution in Nigeria’s imminent collapse and inevitable breakup or a delay in Nigeria’s preordained death. The morally bankrupt kleptomaniac legislators with the conspiracy and connivance of Aso Rock, continue to strangle Nigeria and choke its citizens, while the poor masses are left to fend for themselves. Nigeria under Buhari’s second term will be a state of anomie that thrives on endless crises, violence, and killings.

It’s no secret that a nation can choose to either exalt itself to her people thereby becoming an object of national pride, or hide itself by dulling the citizen’s senses and intelligence, thus negating the primary purpose of a nation. So far, the body of evidence proves that Nigeria under Buhari pursues the second path. Buhari’s administration has taken the advantage of our profoundly ignorant, naive, and Akindanidani citizens fueled by their systemic blind allegiance to the same oppressors who impoverished them.

The paralysis of government and complete disregard for rule of law, the crass stupidity of a ruling class, decayed infrastructure, ravaged and stunted economy, decimated citizens hoping against hope have sealed all hopes and possibilities  that Nigeria can remain one nation for long.
Buhari’s administration is a shining example of a government of feckless inaction, fetid bureaucracy, and unfettered bullshit.

As Buhari prepares for his second term, I’ll encourage our battered citizens to turn their furious indignation into action, their collective misery into unstoppable bond of vengeance for revolution, and direct their anger, blessed anger, to free themselves from slavery and servitude under “one Nigeria” and go their separate ways. This is the only way out. And the time is NOW! 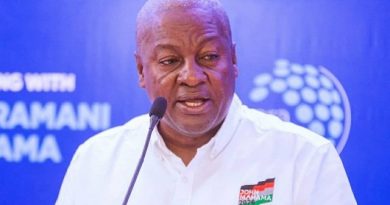 The Concerned Citizens of Ghana in Madrid, Spain wishes to inform the general public that we congratulate His Excellency the