Kim Kardashian is now a mother of four. On Friday, she confirmed the birth of her son, who arrived via surrogate and said that right now, he looks just like his sister Chicago. She also said he is already a well-behaved baby and that all her nerves about being a mother to four have vanished.

“We celebrated our baby boy about a week ago and now he’s here! He’s so perfect! Here are some pics of my CBD baby shower,” she wrote on Instagram Saturday. “I was freaking out for nothing because he is the most calm and chill of all of my babies so far and everyone loves him so much.”

Last month, Kardashian celebrated her son with a CBD-themed baby shower. “So, because I’m freaking out, and the baby’s coming in, like, two weeks, I thought, ‘What better way to celebrate then to have a little CBD?,” she told her guests on the day of the shower. “And we’re gonna do a sound bath because I can’t meditate. It’ll only be 10 minutes, but I thought it would be just cool for us to do—to zen out on a Saturday.”

After Kardashian and her husband, Kanye West, announced to their family that they were expecting another addition, she admitted to her sister, Kylie Jenner, that she was not feeling 100 percent confident about being a mom to this new baby.

“I’m low-key freaking out,” Kardashian admitted. “I didn’t think it was going to happen. I thought like, ‘Oh, it probably won’t even take.'” 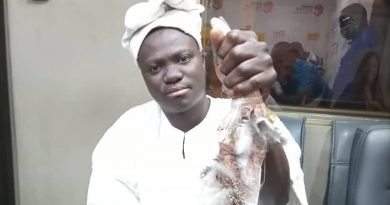