Before I delve too deep into the subject matter, I will like to immediately stress that this piece isn’t intended to reinforce support for internet fraud. Rather, it sort to put on the front burner, the socio-economic foundation that supports the wretched pillars of internet fraud and other related offenses. This article would be drawing a social link between the proliferating rise of crime and irresponsible political decisions by a ruthless set of anti-poor and corrupt politicians.

Fela Kuti was one musician who tried to establish a social link between the people he described as Vagabonds In Power {VIP} and petty thieves. His music, “Authority stealing” helped to establish who should be blamed for the destruction of societal values between petty thieves and the thieving politicians we elected into office.

It will amount to total foolhardy to rush into unscientific condemnation of petty criminals without first taking a painstaking and dispassionate diagnosis of the social base that promotes such ugly menace.

And you do not need to look too far. We live in a society where the ruling class have done a conscious damage to morals and altered what the traditional African society considered to be good values.

These political nitwits are made Deacons and Deaconesses in our churches. Their presence in church is announced with a very loud microphone and subsequently given front row seats. Our villages, communities and family members rewards them with chieftaincy titles. The NGOs and media houses showers this pranksters with several undeserving awards.

The history taught by our school curriculum continues to eulogize their non-existent greatness and falsely personifies them as exemplary leaders. If our history had been fair, we would have been taught how Obasanjo in 1979 massacred University students in Zaria, Ife, Lagos, Ibadan for protesting the removal of subsidy on food for students; we would have been taught how as military head masterminded the disappearance of N2.8billion from the national treasury; we would be taught how as civilian president together with Atiku Abubakar cornered oil blocks for themselves {directly and through proxies}, friends, family, cronies and lackeys; we would be told how he illegally awarded publicly owned properties to himself and thieving allies. If the right history had beentaught, we would have been told how Buhari committed a treasonable felony by dethroning a democratically elected government; an action that should have landed him in the party of the dead.

We would have been told how as PTF chairman, engineered the miraculous disappearance of $2.8billion. We would have been taught how as Military Head connived with IMF/World Bank to impose unprecedented economic hardship on Nigerians while secretly enriching himself and cronies.

Before anyone hauls thunderous blames and torrents of insults at petty criminals, please remember that they were created by the actions, inactions and irresponsible political decisions of thieves elected in position of power and authority.

Killing in the name of God seems more attractive in Northern Nigeria since there are no schools to enlighten their mind about the simple fact that there are no virgins in heaven. Securing a job from Bokoharam seems more profitable than working for the Nigerian army since Boko haram pays better remuneration of $3000 per day to its fighters compared to the #1000 paid to the Nigerian soldier by a stupendously rich Nigerian government. Child cultism has become the in-thing since schools are either inadequate or inaccessible. Many Evans, Anini, prostitutes and yahoo guys have been produced by the inability of government to provide jobs for its young people.

The most noble and readily available profession for our young people who are disciplined enough not to go into crime is sports betting. If not crimes and more crimes, what else can you expect from a country that has over 125million of its citizens living below poverty line?

I do not intend that criminals be speared and indulged for crimes. Nevertheless, he who must come to equity must come with clean hands. Our society must first put itself on trial by doing
a complete purge of all corrupt politicians who has turned the richest black nation into the poverty capital of the world. Before harassing yahoo guys, yahoo yahoo politicians such as Obasanjo, Babangida, Buhari, Jonathan, Atiku, Tinubu,Saraki and their likes must have been served with the justice of a death penalty. 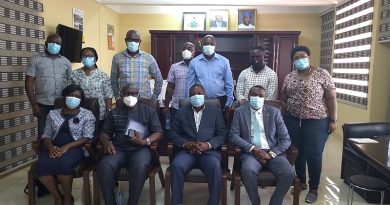 My father! Let your Holy ghost incubate me in Jesus name

My father my maker, Powers contesting with my destiny, expire in Jesus name

Where is the Lord God of Elijah, arise, revive me in the mighty name of Jesus

My father my maker, make all my enemies; my footstool permanently in the mighty name of Jesus

Henceforth oh God, Let every evil calendar, map out for me this year; be burnt by fire in Jesus name amen

Don't bring people too close to your heart. Because when they know everything about you, they know exactly where to hit you. ... See MoreSee Less

Yes ooo dey know in and out of you very bad