The EFCC that is controlled by the real fraudsters and looters who steal, kill, and destroy our lives and commonwealth as working people has arrested raging  and street waving hip hop star; Afeez Fasola aka Naira Marley over his so-called “aiding and abetting” internet fraudsters popularly known as yahoo boys.

First, mass fraud started blossoming in Nigeria in the mid-80s when state welfarism was removed from the letters of economy. The ideas of neo-liberalism, which promotes the transfer of state wealth through criminal policies like privatization; liberalism; deregulation; naira devaluation; and those Vision less visions, are imposed on the masses. This caused mass unemployment, poverty, and mass hardships all over the country. This in turn created several behemoths like 419; yahoo yahoo; mass sex works; kidnapping; and many more.

Those who caused all these policies are our rulers since the 1980s. The same set of people created the Economic Financial  Crimes Commission (EFCC); a popular legal department attached but independent of the police force. So, the same few people who creates the crimes are the ones does the persecution calling!

What this short piece is saying is that we must understand why yahoo yahoo is rampant. It is never the lies of “value degradation” or the absence of godliness that some nitwits try to tell us. Na poverty and hardships dey cause yahoo and some other crimes.

But while we understand all this, what should we so?

Yahoo yahoo is now an escape route for the youths. Just like betting has turned to self employment all over from youths to oldies. In fact market women are now great betting Amazonas!

We should never encourage it especially as those who are being defrauded are middle class of Europe and Americas.

We must nip the while mess in the Bud! We must start a clinical cleansing of the Augean stable in the country that is celebrated as the poverty capital of the world. Yahoo guys dey learn work for where politicians dey. In fact most of those who are politicians today are known fraudsters and drug kingpins. The NDLEA has been compromised over the prosecution of Senator Buruji Kashamu. There is also a case of Femi Gbajabiamila’s escaping prosecution in US before coming to be a representative in the parliament.

And aside the crime that the politicians has committed before going to public office, they go to government to loot and destroy. So, the case of fighting Yahoo boys is like crime lords fighting crime copycats!

We have a country to take back. We  will only do that if we all make sure that we never allow some to be judges in their own cases. The EFCC should raise counter orientation over internet fraud, and be clear that the leading criminals in financial impropriety are in the government houses, Parliament, banks and capitalist corporations.

Then, we all must stop allowing EFCC to have monopoly in fighting financial crimes. Not saying others agencies should carry their bodies o. We the working people must start taking security conscious by taking our destinies into our hands. We must start being in charge of our own laws and face the most fierce of problems that continue to make our youths go into yahoo yahoo and other crimes.

Naira Marley is defending the Yahoo guys. But he says he is not one. A clearer view of what Naira Marley and stars like 9nice before him are saying can be understood in Femi Osofisan’s Once Upon Four Robbers. The play explains why the robbers are a reflection of a greater robbery led by those who dictate the state policies in tandem to their targets of horrible power and primitive accumulation.

Whereas, Q.Dots’s 2017 blockbuster- “Mo fe sashe” explained the socioeconomic import of the rise of Yahoo yahoo but the ruling class ignored it. This is just how they ignore the positions of revolutionaries on the excessive poverty and hardships in the land. What the politicians so is to invest in bogous security and impose more hardships through austerity and other anti-people policies. If Anti-corruption President Buhari can rig in Governor Ganduje who in the open glare was stealing dollars and other hard currencies belonging to Kano state, the Yahoo boys are seen by the masses as insignificant.

The arrest of Naira Marley is an attack on free arts. A connoisseur  of verses myself, Naira in his “Am I a Yahoo boy” indicted bloggers and the government over the allegations he is being arrested of now. He even joined in chastising police brutality and SARS murdering officers. Adapting Fela’s lines, Naira Marley posits: ” government na barawo!” He then go on to attack bloggers who mostly are government agents as “armed robbers.”

With President Buhari returning CBN governor Godwin Emefiele he has stamped continual devaluation of the naira. This means that the ruling class will commit grand Yahoo yahoos as the currency is made more useless and we depend largely on importations through the wicked Foreign Direct Investment (FDI).

Morally, nobody is at war with who is more dangerous to we all as a people between politicians and yahoo yahoo boys. But our Lords of marality, religious leaders, are worse than Yahoo boys themselves. One of them just bought a jet, and told the church he bought it from other proceeds.

One has to conclude that internet fraud is wrong. But it is created by the same seaters on the prosecution benches. To stop it, we must attack the biggest Yahoos in the country. Those who never sweat  like the Yahoo boys. Those who we are singing their praises and are still destroying our now and future.

The EFCC officers should release Naira Marley and others who meagerly praise sing Yahoo boys. Their bosses who perpetrates local and international crimes as is ITT; Oil Windfall; Halliburton; Siemens; and Malabu are going round free and bubbling. We the people believe that they are the greater enemy.

We the Youths must also beware of losing real values copying the greed and powers of our rulers. As Seun Kuti rightly explains, the conduct of Yahoo boys is as primitive and devaluing as the government fraudsters. This must stop. Real values can be acquired without walking the criminal roads.

But on the the question Naira Marley has raises and he is being arrested for? Never infringe on the artistes’ rights to poetic licence, go and prosecute those with government licence and are committing genocidal YAHOO PLUS !!! 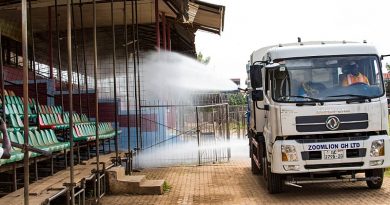 Why chefs are reaching for Japanese mayo (and you should be, too)