* Tenure due to end this month

* Central bank head first to get 2nd term in 20 years

ABUJA, May 9 (Reuters) – Nigeria’s central bank governor Godwin Emefiele has been nominated for a second five-year term, a move that could comfort bondholders keen to see the bank’s policy of a stable and strong currency continue.

President Muhammadu Buhari, who has backed Emefiele’s monetary policy, nominated him for another term, according to a letter read on the floor of the senate on Thursday. The upper house of parliament is expected to confirm the nomination.

Emefiele has overseen an interventionist currency policy at the behest of the presidency, propping up the local naira by pumping billions of dollars into the foreign exchange market.

He also introduced a multiple exchange rate regime to try to mask pressure on the naira and avoid a series of devaluations, a step that has kept liquidity tight in Africa’s biggest economy.

The bank cut rates to 13.4 percent in March, its first rate cut since November 2015. The rate has been held at 14 percent since July 2016 to support the naira and curb inflation.

Buhari, who starts his second four-year term on May 29, has pledged to rejuvenate the Nigerian economy, sub-Saharan Africa’s largest energy producer. Emefiele has offered affordable credit to boost some industries to offset curbs on access to foreign exchange for those sectors imposed to protect local producers.

A central bank spokesman was not immediately available for comment on Emefiele’s nomination.

Emefiele, whose first term was due to end this month, will be the first central bank governor to have his tenure extended into a second term since Nigeria’s return to democracy in 1999.

“The idea of continuity might give some comfort to foreign investors who will expect a policy of naira stability to continue,” said Razia Khan, head of research for Africa at Standard Chartered Bank in London.

“This lessens the risk of any near-term profit-taking.”

Emefiele’s return could be supportive for bonds as investors hunt for yields on the debt market while equity players worry about slow growth, expecting sentiment to remain weak for stocks, analysts say.

More than $6 billion has flowed into the local bond market since February’s presidential election as foreign investors piled into debt to lock in yields as high as 14 percent, helping to keep the currency stable.

“Governor Emefiele’s nomination means that we will likely not see a major change in the conduct of monetary policy or a much-needed shift in Nigeria’s diversification strategy,” said Cobus de Hart, senior economist at South Africa’s NKC African Economics.

Nigeria entered and exited its first recession in a quarter of a century under Emefiele’s tenure as global oil prices plummeted and then gradually began to rebound.

Some economists have argued that his strong currency policy exacerbated the downturn.

Anthony Simond at Standard Aberdeen Asset Management in London said he expected a continuation of current monetary policy. “Whether it will be good for the country in the long run is a different question. But for now, high carry and stable FX will continue,” he said.

Emefiele has said the bank would continue its tight monetary stance in the near term and sees inflation of 11.3 percent in February rising to 12 percent this year before moderating. (Reporting by Camillus Eboh; Additional reporting by Chijioke Ohuocha and Alexis Akwagyiram in Lagos, Karin Strohecker in London and Paul Carsten in Abuja Editing by Gareth Jones and John Stonestreet) 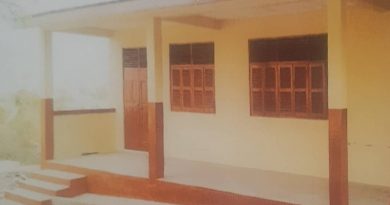 Kwabena Okyere Darko-Mensah, the Western Regional Minister, has visited the family the late Charles Kwakye Agyako to commiserate with them.