HOUSTON, May 6 (Reuters) – U.S. refiners have turned to several lesser-used oil suppliers in the wake of U.S. sanctions that restricted usual providers of widely-used grades as they gear up for peak driving season.

Iraq, Nigeria, Brazil and Angola combined this month are set to deliver their most crude oil to the United States in more than 18 months, according to Refinitiv Eikon data and trade sources, helping deliver needed heavy and sour crudes.

All told, May imports from those countries are expected to come in at about 1.23 million barrels per day (bpd), more than double April’s haul. Those cargoes include 11 tankers carrying about 600,000 bpd of Iraqi crude, the most from that country in a year, Refinitiv data showed.

The bump in imports from those nations versus the prior month reflects reduced supply from Venezuela and Iran due to U.S. sanctions, and declining OPEC production that has cut availability of heavy and medium sour grades. U.S. refiners also are finishing spring maintenance and gearing up for vacation-season gasoline demand.

Cargoes from these four countries are designed to “offset a majority of the loss” of Venezuelan heavy crude from sanctions, trade sources said. The move to bar the flow of dollars to the government of Venezuelan President Nicolas Maduro this year has halted U.S. purchases from about 500,000 barrels per day (bpd) last year.

West African producers Nigeria and Angola are set to deliver 420,000 bpd combined this month, the highest in 13 months. Another 206,000 bpd of Brazilian crude are due to land in May, the most since August.

Receivers include the once-top U.S. buyers of Venezuelan crude. Four tankers will deliver a combined 95,000 barrels per day (bpd) of crude from Iraq, Nigeria and Brazil to Chevron Corp’s Pascagoula, Mississippi refinery, the most from those three countries in more than a year, the Refinitiv data showed.

Three tankers chartered by Valero Energy Corp, the New Courage, the New Energy and the Pantariste, arrive this month in Louisiana, Texas and California with 187,000 bpd of Iraq’s Basrah Light.

Chevron does not comment on supply matters, spokesman Braden Reddall said. A Valero spokesman pointed to an April 25 earnings call where executives said a third of the crude processed in the first quarter came from “opportunistic” purchases from suppliers including Brazil.

Valero and Chevron were the top U.S. buyers of Venezuelan crude last year, behind Citgo Petroleum, with 2018 imports of 166,000 bpd and 83,000 bpd, respectively. The two remain “very active in finding replacements,” one trader said. (Reporting by Collin Eaton Editing by Tom Brown) 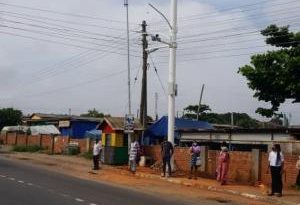 This Centre of Excellence is not working

Trump admits he misses being president