Garba Madami, Resident Electoral Commissioner (REC) in Kwara State, has revealed that some politicians in the state approached him to rig the 2019 election in their favour.

Speaking with journalists in Ilorin on Monday, Madami said he rejected the offers and stood his ground on delivering a credible election to the people of Kwara.

“There was pressure by politicians who offered me money to compromise the 2019 general election in Kwara State, but I stood my ground and refused to give in,” he said.

“The nature of our job at the Independent National Electoral Commission (INEC) is too tempting. It is left between you and God to do the right thing and keep your integrity, or compromise and lose your integrity. You may even go to jail.”

The Kwara REC lamented the money politics being played in Nigeria and the effrontery of politicians in their attempts to buy votes and bribe electoral officers to do their bidding.

“The politicians have money and some of them feel that they can buy anybody with the money,” he said.

“It is a matter of integrity; it is left for you to be careful and work transparently to keep your integrity.

“What I did in Kwara State before the elections was to go on air and tell the people that no amount of money can buy me. I made them understand that their votes would count and I was not ready to compromise.

The All progressives Congress (APC) won all the elections in Kwara, clearing all 24 state House of Assembly seats and all three senatorial slots, highlighted by the loss of Senate President Bukola Saraki, candidate of the Peoples Democratic Party (PDP) to Ibrahim Oloriegbe. 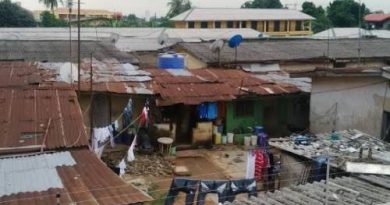 Why Coronavirus May Be Deadlier In Nigeria: A Housing Perspective By Jelili Adebiyi

My apologies to Joker boy and other Esan people on behalf of Uromi for a discriminatory remarks by Chief Mike Onolememen.I Martins Azekhumen Okoukoni wants to render public unreserved apology to all our Esan brothers and sisters on behalf of Uromi people regarding a discriminatory remarks against a musician popularly known as Joker boy by Chief Mike Onolememen and others

This apology is coming after 72 hours of my post requesting Chief Mike Onolememen to apologise for refering to Joker boy as "Esan native called Joker boy resides in uromi but not a native" I regard his statement as discriminatory, hate speech and a tactical way to create division in Esan land.

Section 42(1)(b) constitution of federal republic of Nigeria 2011 as amended has a fundamental provision that caution discrimination regarding communities, ethnicity, groups or due to their place of origin, sex, religion and political opinion.

According to the United Nations by the department of economic and social affairs and social inclusion, discrimination affects people’s opportunities, their well-being, and their sense of agency, therefore persistent exposure to discrimination can lead individuals to internalize the prejudice or stigma that is directed against them, manifesting in shame, low self-esteem, fear and stress, as well as mental poor health.

Consequently, I'm directly inform that other Esan people living in Uromi are considering relocating, feeling unwelcome due this statement and I want to assured our Esan brother that all Esan men and women are free to live in Uromi and every other part of Esan Land. His statement doesn't not reflect the mindset of Uromi people. We are the same therefore we should never allow hate to win in our societies especially now that we are on the move to start the process of developing Esan Land.

I understand there are a lot of frustration amongst the political groups or leaders that have over the years used Esan land as political business franchise and I understand the same people that was given free opportunity to represent us done so in a away that put their interest first, that is why they are unable to come out clean and condemn the current insecurity in our land because they might offend their masters.

As we continue to fight for the improvement of the livelihood of Esan people and insecurity, I employed Esan people to work in unity and Shun those that takes advantage of Esan disunity to mismanage our resources. We must stay strong for the tasks ahead.

😂😂🤣🤣. Asibor Solomon I expected something like this from you. You don't use wrong to correct wrong. This is how to be rational

Which position you dey eye🙄🙄

Oga lawyer, how did you see this as discrimination"he is an Esan native not a native of Uromi"?This is to remind you that Dr Mike is an Adolor of Uromi,as an Adolor, whatever that will give Esan bad name he has the power to correct it.What stopped other people from Esan land not to correct the joker boy?if you keep quiet for what seems to be wrong without correction that mean you are in support.

I haven't made any sense in all your write up. Why pursuing shadow and leaving the main substance. It's only a foolish man that will see a another insulting a traditional king and still applaud him. Martins, is it because Joker Boy didn't direct all his insults to your traditional ruler? Honestly it pains

You are bless my Bros!!!

I am sure Martin's okooukoni is not from Uromi. So not waste your time on his writeups.

Is dis not stupid to start apologising to who doesn't deserve a bit of it...all in d name of politics or wat? U didn't present urself well at all..dis is soo low of u

Until other kind of jobs and skills in society get their due respect. People will continue to do anything to get a certificate that's not going to give them a job. We must tell the youths that learning a trade is honorable. And that not been a graduate or getting formal education is ok....so long you're productive and adding value to society.

See what society has tuned these children too. What future does this girl have? What a shame 😒😒

Our Fathers Had Flat Tummy In The 80s ... See MoreSee Less

You see that hand bag nothing new bro calm down.

nothing new My borther

Do DNA test for Rawlings alleged daughter before you bury him – Leslie Mensah Tamekloe, Others told