Now, my driver is a good driver. Omo yen n try. I like him.

But there’s always this verbal war of attrition that brews between us when we are traveling on a Nigerian road, of late, this Ibadan-Ilesha stretch.

Dodge the first, dodge the second, the third embraces you. That’s how bad they are.

I mean, for every alignment-unaligning, shock absorber-draining, bushing-bashing and tyre-twisting pothole on the road from Ibadan to that Ilesha/Akure junction, there’s a fatter unidentical twin on the other side – Ilesha to Ibadan.

They are as disturbing as they are scary.

As it obtains on most Nigerian “express” roads like this one, there are times road users always needed to make a switch back and forth on the two sides of the road to dangerously drive one-way on the side with less worse fate per holes. [don’t read ‘better’, read ‘less worse’, ‘better devil’…yeah, something like that]

Oh, don’t mind me, there are smooth portions on the road, smooth as the surface of an Okro grater.

While journeying this particular day last week, as we were about to exit the Ibadan end of the stretch, “gba-gam!”, it happened as usual. Two other cars, a trailer and a bus, caught in the unavoidable manouver through a maze of holes.

It was usual, but this time, I don’t know what happened yeah, I just know I got vexed unusually.

“AY, just be parking the car when we meet these potholes, especially the very bad ones. I want to take pictures…maybe it will help me. Ori mi ti fe daru!” [my head is on the verge of scattering!]

You know that feeling when you act somewhat bizarre after getting touched (read torched) beyond your threshold of endurance?…Ehnn, that.

These pictures you see attached aside, I did a mental count of the potholes on this Ibadan-Ilesha stretch as roughly as I could, both to and fro. Dear Fam, I counted close to 400 accident-baiting, death-drawing potholes on a stretch covered merely in 100 minutes.

My mind was just talking to itself, ranting, as I performed the dangerous task of doing photoshoot on tar.

“FG will tell me today! Why they keep and leave these roads like this!”

“Haba! For over a year now driving this route, these holes just left there!”

“Brother Fashola and FERMA must see all these!”

These and many similar rants ran across my mind.

However, trust Nigeria, she always has a way of further rubbing it in as e dey hot, your hot rant irrespective. I mean, while I was busy mindranting, shebi Nigeria suppose pity me small and allow me rest? But no oh, she had to show me how your normal suspects, the Police, customs’ officers and FRSC men, use these potholes as naturally-occurring, ‘God-given’ checkpoints.

You spot them standing few inches post-potholes, wearing the confidence of a master hunter whose trap just came through bearing game. Just that in this case, the trap is the too-big-deep-wide-large pothole no car can afford to speed past.

For the simpletons always masquerading as supporters of the government, the ones who will read this piece and say stuff like, “this Sayo sef, always seeing bad in Nigeria, he abandoned the smooth part of the road o, and chose to snap pothole”, well, let me apply the wasted effort of trying to make you get it.

See, like fellow users, I’ve seen countless accidents on this stretch, many of which are not unconnected to the presence of these holes, and all it takes is just one of it to establish avoidable fatality. But no, that fact doesn’t matter to some of you blind supporters, as long as you can type “RIP” and move on with the withered plume that passes for your hearts.

Thankfully but unfortunately, I didn’t have to pray for a Ram of evidence to show up to save my Issac of rants that day, as I met a fallen truck carrying drinks on the road while I took the shots [see below]. Cause? Your guess is as good as mine.

Without mincing words, as it is today, the Ibadan-Ilesha road is a highway to a hellish travel experience highlighted by the presents of the holes. This road is as strategic as the Lagos-Ibadan expressway which keeps taking government’s perennial attention; for what’s worth, it is the major inlet into the entire southwestern Nigeria, hence, deserving attention too.

I apparently figured it was hightime we stopped acting and pretending like these potholes don’t affect us. 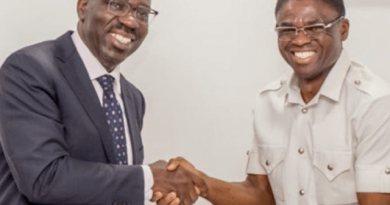 Ghana is noted as a beacon of democracy and has striven for peace, freedom, and justice since the country adopted