Timnan Rimdap, Chairman of Plateau State University branch of the Senior Staff Association of Nigerian Universities (SSANU), has called on the state government to pay N607million arrears owed workers since 2009.

Rimdap said this while briefing newsmen in the state on Saturday.

The chairman said Plateau State University remains one of the few universities in the country that was yet to be paid the allowances and urged the state government to pay the arrears of gratuities owed to staff.

He appreciated Attahiru Jega, the Council Chairman, for his labour friendly attitude, adding that he should carry out a comprehensive audit of placements in the university as many placements were done without recourse to the provisions of the scheme of service.

“We have seen several professional accountants placed on grade level 8 in violation of the provisions of the Scheme of Service which places them on grade level 9. We have seen situations where professional accountants are converted to the Executive Cadre in violation of the Scheme of Service. Our members have been shortchanged for far too long,” the chairman said.

Rimdap blamed the development on the exclusion of unions from the composition of the committee saddled with the responsibility of undertaking such tasks, stating that if unions were included in the membership of the appointment and promotion committee such things would not have happened

He further urged the governing council to include SSANU in the composition of the disciplinary committee and any committee constituted to amend the university law, condition of service and scheme of service.

“We were surprised to have been excluded from the composition of the committee constituted to amend our own Conditions and Scheme of Service. That decision was inconsistent with the collective bargaining principle which is deeply enshrined in Nigerian and International Labour Laws. Conditions of Service should be a product of collective bargaining not unilateral imposition.

“We equally call upon the Vice Chancellor of the University, Professor Yohanna Izam, to immediately constitute a Pension and Gratuity board in line with the recommendations of the committee constituted to advise management on the operation of the scheme. We are being told that our gratuity funds have been lying idle for years without being invested.

“If that is true, then we’re losing value on a daily basis which is unacceptable. We are also not unaware of the fact that Governing Council directed, five years ago, that the board should be constituted to invest the funds. We want that board constituted immediately. 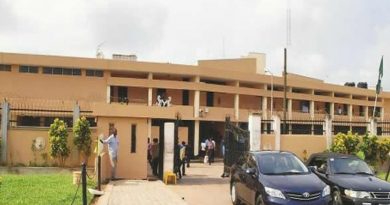 Benin monarch charges religious leaders to practice what they preach

If you need a Monday pick-me-up, allow me to alert you that Fenty Beauty (yes, Rihanna’s beauty line) has a