Femi Falana (SAN), a foremost human rights lawyer, has slammed media practitioners for neglecting their duty to the Nigerian people.

Speaking at a press conference to commemorate the 2019 World Press Freedom Day, Falana addressed burning issues in the country — from press repression to the controversial private visit of President Muhammadu Buhari to the United Kingdom.

“Given the crisis of underdevelopment, the press should not allow reactionary politicians to divert attention from the hydra-headed problems of comatose economy, unemployment, infrastructural decay, insecurity, looting of the treasury, armed robbery, kidnapping and terrorism,” he said.

“Instead of mobilising Nigerians to defend themselves from the gangs that overwhelmed the security forces, the press has joined politicians to shift public attention to reckless permutations for the region that will produce the President in 2023. Is there any evidence that Nigeria will be in a position to conduct elections in 2023?

“All elected public officers should be made to proffer solutions to the crisis of underdevelopment and stop the irrelevant debate on the educational qualification of any candidate. Therefore, the media should stop giving undue attention to the educational qualifications of a former military President and a former civilian Vice President to contest a presidential election in the country.

“Regrettably, the press has left the serious crisis of insecurity in all parts of the country to join the ruling party in questioning the citizenship of a former elected state governor and former Vice President of the country.

“Since the 2019 elections have been concluded the duty imposed on the media is to ensure that political parties and elected officials are held accountable.”

He added that with the growing rate of insecurity and killings by bandits in the country, Nigerians should begin to demand that Buhari and other governors outside the country come back and find a solution to it.

He also urged Nigerians to bar public officers from embarking on foreign, private or official visits to other countries until further notice.

Lamenting the absence of rule of law in the country, Falana stated that provisions of the Constitution have been “conveniently sacrificed for political expediency or self-aggrandisement of highly placed public officers”.

“People in government, and particularly those in the executive arm, can abuse their powers and positions to promote their own interests or those of their friends and allies at the expense of public interest, through arbitrary acts and corruption, or through inconsistent application of laws,” he said.

“For instance, the anti-corruption campaign of the Buhari administration has been discredited through the selective prosecution of corrupt elements in the society. Worse still, corrupt members of the executive are currently using the police and anti-graft agencies to settle scores with corrupt opposition figures. It thus seems that politicians and associates of those close to the seat of power in Abuja are protected, despite strong evidence of corruption and money laundering against them. Such abuse of the rule of law is subversive of law and order in a democratic society.”

Condemning Buhari’s private visit to the United Kingdom, Falana said the government has failed to look at the “constitutional implications of the privacy of the visit” while adding that the movement and “activities of the No 1 Public Officer in the country cannot be shrouded in secrecy”.

He added: “No doubt, the President is entitled to embark on local and foreign trips to attend the engagements of family members and friends like other citizens.

“But the President is not permitted by the Constitution to abandon the enormous responsibilities of his office for 10 days on account of a private visit to the United Kingdom or any other country whatsoever. Since President Buhari’s current private visit to the United Kingdom for an undisclosed mission has made it impossible for him to preside over the meetings of the Federal Executive Council and perform other functions of his office he ought to have transmitted a letter to the President of the Senate and Speaker of the House of Representatives in compliance with section 145 (1) of the Constitution so that the Vice President can run the country pro tempore as Acting President.

“Having regards to the facts and circumstances of the controversial private visit of President Buhari, he is deemed in law to be on vacation or leave of absence for 10 days. Whether the President is on vacation or not, it is not in dispute that he is unable to discharge the functions of his office for 10 days.”

He stated further: “Section 145 (2)  will be automatically invoked to transfer the powers of the President to the Vice President as Acting President if the President is unable to transmit a letter to the leadership of the national assembly once he abandons his duty for 21 days.”

Falana maintained that Buhari should, without any further delay, transmit a letter to the leadership of the National Assembly with an apology for not doing so before leaving the country for his private visit. 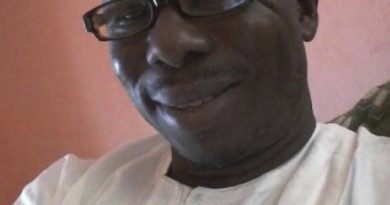 Watch Out: Wike Is Coming! By Uche Ugboajah

Nat Geo’s “Trafficked” delves into the criminal underworld, while putting its reporter at risk