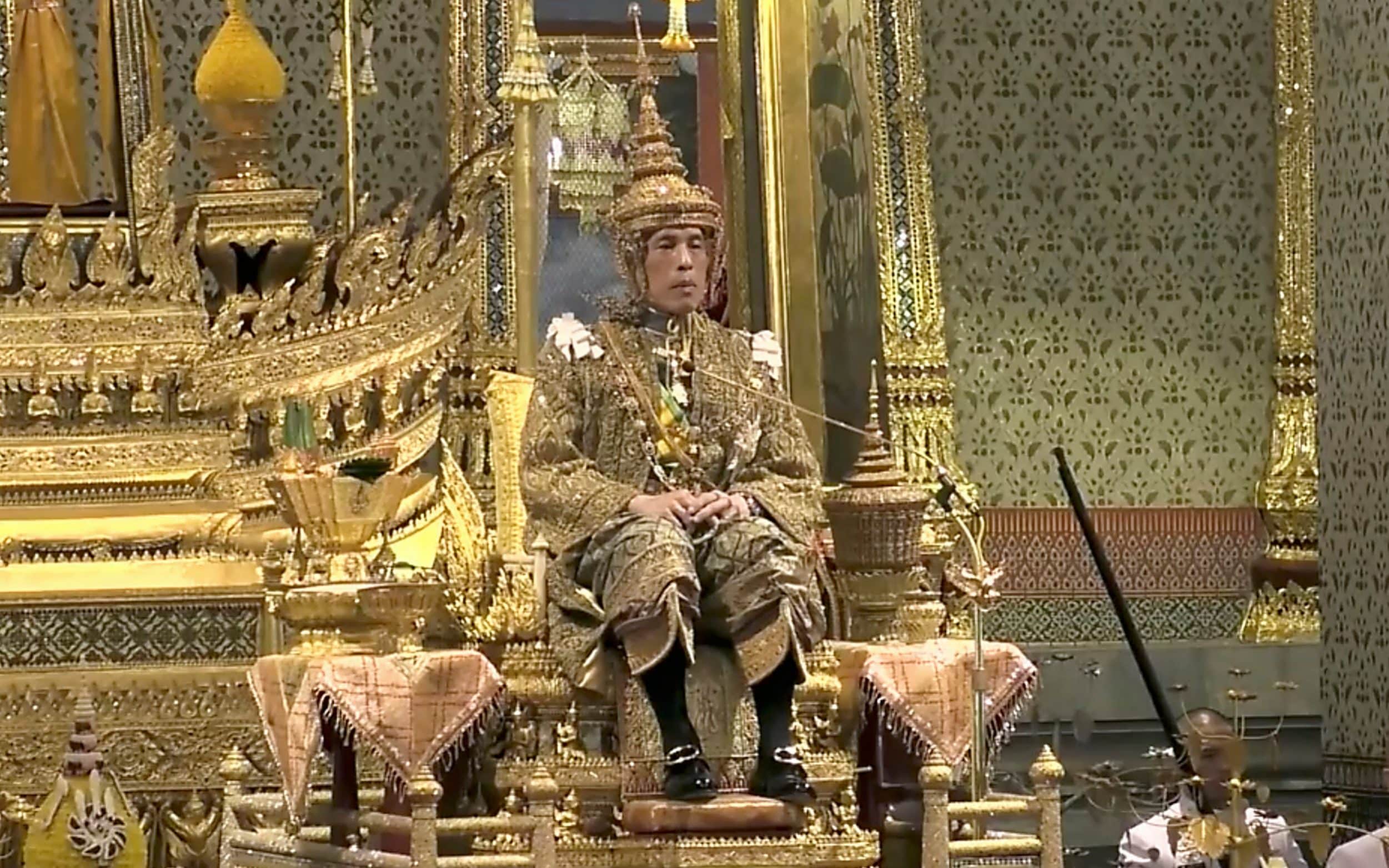 The new Thai King was doused with holy water before finally putting on a towering 7kg bejeweled gold crown as he ascended to the throne at the start of three days of pageantry steeped in ostentatious traditions.

The series of ancient rites, last seen almost 70 years ago, began with a royal purification ceremony at the Grand Palace, where holy water was showered over king King Maha Vajiralongkorn’s head before he took the seat of power sheltered by a 9-tiered umbrella that may only be used by the monarch.

After wearing the glittering crown for the first time since his father, King Bhumibol Adulyadej, died two years ago, the king was gifted with symbolic  regalia including golden royal slippers, a “sword of victory” and a fly whisk made from the air of a Himalayan yak, which signifies his duty to chase away his people’s troubles.

But the coronation, which weaves together Buddhist and Hindu Brahmin traditions, comes at a time of great political uncertainty in the Southeast Asian nation.

Notable among the attendees at King Vajiralongkorn’s ascension was his elder sister Ubolratana. Ubolratana sent sohckwaves through the establishment when she announced she was running for prime minister against the military junta earlier this year – only for her bid to be scotched by her brother in a rare royal command.

The king denounced her move as “inappropriate and unconstitutional” and the party was later dissolved by a court, after being accused of dragging the monarchy into politics.

At the time she said she was saddened by the decision, posting on Instagram a picture of a scenic garden including the hashtag #HowComeItsTheWayItIs. She posted pictures yesterday (Saturday) of her hugging the new king in the cloistered halls of the palace hosting his coronation. Another selfie was marked #OnceInaLifetimeEvent.

Meanwhile, results of the election due to be released this week point to a victory for the ruling military junta and its prime ministerial candidate General Prayuth Chan-ocha amid accusations of rigging.

His tinkering in the elections are not the only sign King Vajiralongkorn, educated in Britain, wants to leave his own imprint on the monarchy by taking a more interventionist approach to national politics than his father.

Since informally taking over the reigns during a period of mourning in October 2016, he has tightened control over royal institutions and political privileges, acquiring new powers to ensure his right to intervene in government affairs, especially during times of political crisis.

Just hours before the election, the king made an second statement urging Thais to support “good people” to prevent “chaos,” in a statement widely viewed as support for the pro-military ruling party.

General Prayuth was a guest at the king’s surprise wedding on Wednesday to Suthida Tidjai, a former flight attendant turned deputy commander of the monarch’s personal guard.

While the extent of the king’s future involvement in politics remains unclear, he will enjoy the same deification experienced by his ancestors, and his court will be protected by strict lese majeste laws that carry jail terms of up to 15 years for offending the monarchy.

Images of the new queen lying prostrate in a pink gown at the feet of the king during their marriage ceremony signalled the reverence with which the Thai people treat their monarchs.

Queen Suthida’s low bow, made with no eye contact with the king, was part of a centuries-old ritual that requires those in his presence to crawl towards him on the floor while wearing no shoes as a mark of respect.

On Sunday will see the newly crowned king, now known as King Rama X of the Chakri dynasty, elevated on a palanquin and carried by soldiers in scorching heat past sacred temples to greet the public, who have been asked to turn out in yellow, a colour associated with the monarchy.

On Monday he will meet religious and business leaders and foreign diplomats and grant a public audience on the balcony of the Suddhaisavarya Prasad Hall.

The Youth Harvest Foundation Ghana (YHFG), a Non-Governmental Organisation, has appealed to the Government to reduce tax on sanitary pads