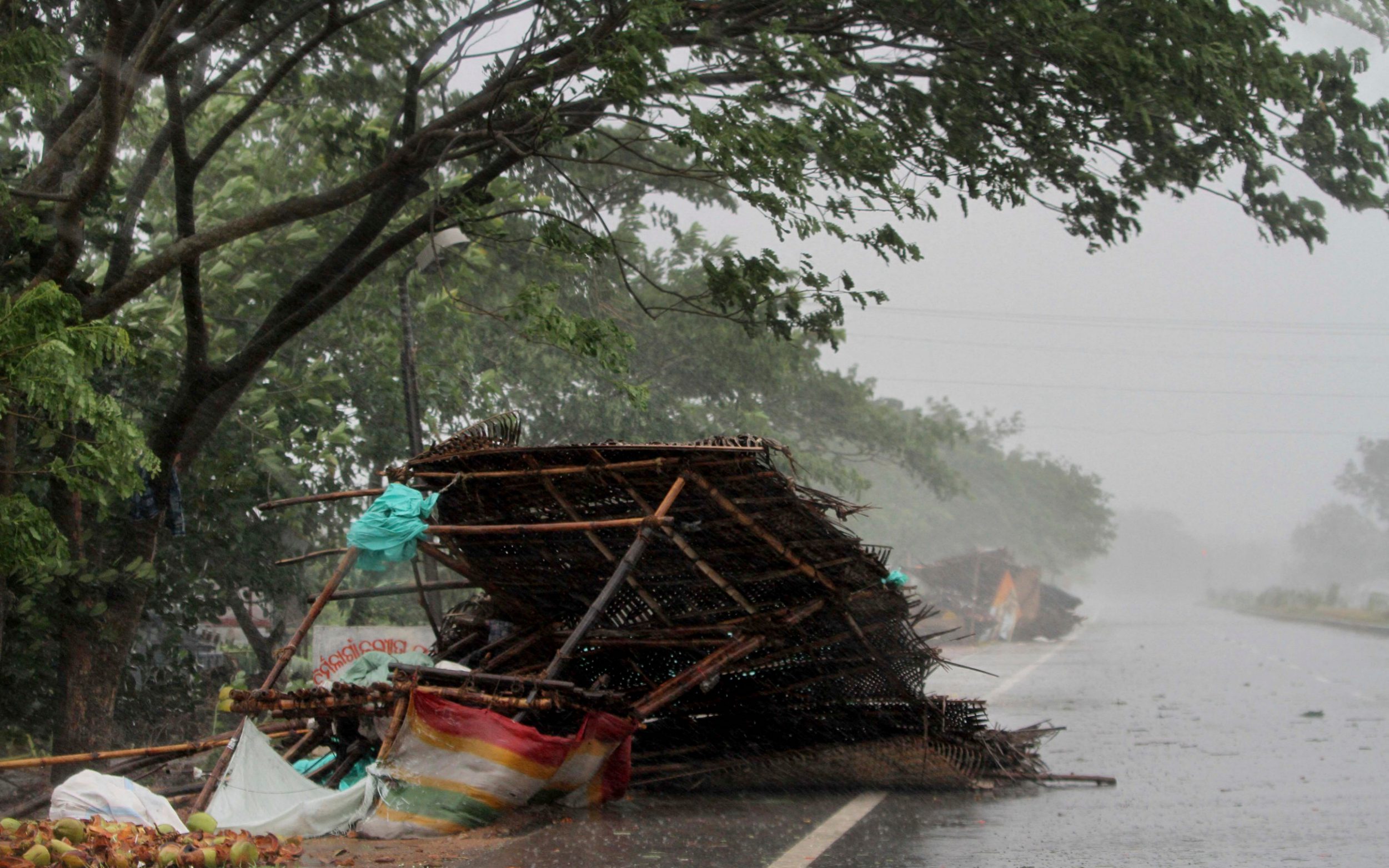 The most powerful cyclone to hit India in 20 years has slammed into the country’s east coast, killing three and leaving chaos in its wake.

Cyclone Fani made landfall in the seaside town of Puri, in the eastern state of Odisha around 8am local time on Friday, bringing torrential rains, and ferocious winds with speeds over 100 mph.

TV footage and video clip online showed trees straining against the cyclone across the east coast, from the city of Kolkata down to the state of Andhra Pradesh, with one clip showing the roof being blown off a building on the campus of the All-India Institute of Medical Sciences in Bhubaneswar, the state capital of Odisha.

“Extensive damage to structure of AIIMS Bhubaneswar reported due to Cyclone Fani. All patients,staff, students are safe.

“Many water tanks have blown off, lighting poles are down, air conditioners damaged. We  have enough supplies, ready to support the state,” said Preeti Sudan, the health secretary.

More than 1.1 million people have been evacuated to temporary shelter as Narendra Modi, the prime minister, said “the nation is with you”, and reassured people that all federal resources had been allocated to aid the states affected.

“It was a massive cyclone, like many others our house is flooded. Boundary walls of houses around us have collapsed, trees have been uprooted. It is a panic situation,” Anuradha Mohanty, a Bhubaneswar resident, told Reuters.

All flights from Bhubaneswar have been cancelled and Kolkata airport is closed. A total of 140 trains including 83 passenger trains have been cancelled so far. After crossing Odisha, cyclone Fani – pronounced Foni – is likely to move up towards West Bengal before tapering off.

K J Ramesh, Director General of the India Meteorological Department, said. “After making landfall this morning, cyclone Fani has started weakening and it’s likely to enter Bangladesh by tomorrow evening,” he said. “No cyclone ever had such a long duration in April.”

The Army, Navy, Air Force, Coast Guard and the National Disaster Response Force have been deployed in the region.

Mr Modi told an election rally in Rajasthan on Friday: “People living in coastal areas in eastern and southern India are facing an extremely severe cyclone.

“The centre [government]is in continuous contact with the governments in Odisha, West Bengal and Andhra Pradesh.

“The NDRF, Indian Coast Guard, Army, Navy, Air Force are working with the states. I assure the affected people that nation and the Centre are with them.”

Despite meteorologists predicting Fani will weaken in the next 24 hours, authorities in the state of West Bengal and the neighbouring country of Bangladesh are on high alert as the cyclone is expected to reach towns and villages along the banks of the Ganges.

Rising water levels on the low plains either side of the border could be hit by landslides and a storm surge four-to-five feet higher than normal astronomical tides, the Dhaka Tribune reported.

There is particular concern that the winds and rain could cause mayhem in the densely populated coastal districts in Bangladesh, from Chittagong to Satkhira, on the Bay of Bengal.

Humanitarian groups are especially concerned the Rohingya refugee camps in Cox’s Bazaar could face devastation as high velocity winds and violent rains slam down on the makeshift camps.

“The concentration of the 1 million displaced Rohingya people in Cox’s Bazar is now among the densest in the world and, even if the region is not hit directly, the impacts of Cyclone Fani will create havoc.”

Need a better way to start your day? For your essential rundown from The Telegraph, sign up to our free Front Page newsletter and new audio briefings on WhatsApp.

A team of researchers in Paris is conducting an experiment that uses photons, or particles of light, to process quantum information