Labour and Productivity Minister, Chris Ngige, thinks it’s a virtue to speak first, and then, think later. He’s been that way since he came on the public scene nearly two decades ago. Those who know him well have learnt not to take him seriously.

But he takes himself very seriously. We saw that again from his comment on Channels TV last week on whether or not we should be concerned about the migration rate of the medical workforce, especially doctors.

Ngige said, “I am not worried (about doctors leaving the country). We have surplus. If you have surplus, you export. It happened some years ago here. I was taught chemistry and biology by Indian teachers in my secondary school days. There was surplus in their country and we have surplus in the medical profession in our country. I can tell you this. In my area, we have excess.”

If he was talking about politics, I might agree; because that is one area where there’s a surplus, and also a place where Ngige has established a reputation as a clown. But it would come as a shock to even medical interns, that the minister would be speaking about trends in medical practice like an oracle, and even claiming as his own a profession that has forsaken him.

Ngige trained as a medical doctor alright. But since he became a politician of the most comical variety two decades ago, he has fought tooth and nail to remind us that he is still a medical doctor. He may not have left medicine, but he needs to wake up: medicine has since left him.

If his heart still beats even faintly for the profession, Ngige would at least get the basics right: there is clearly not a surplus but an acute shortage of supply in the medical workforce, including doctors.

Whereas conservative estimates say that Nigeria needs 237,000 doctors to move the needle, the Health Minister, Professor Isaac Adewole, said last May that we have 88,692 registered doctors out of which only 45,000 are currently practicing. That is a doctor-population ratio of 1:4000. That is not a surplus. Except, of course, if the surpluses are the likes of Ngige who have been exported to politics.

The 37 medical and nine dental schools currently turn out fewer than 3,000 doctors; that means that at current levels, not to mention the dreadful curricula, it will take another three decades to produce enough doctors to meet domestic needs, never mind any surplus for “export.”

How can Ngige not get that? He spoke with such casualness and carelessness that the TV interviewer could hardly believe her ears. She sliced the question in different ways but got the same incredulous answer.

There are serious problems in the health sector and we need to get beyond the malicious carelessness of a fair-weather doctor to understand the problems, find solutions and begin to touch and to save more lives.

Medical brain drain has been a major problem for at least two decades. Apart from Ngige’s fantasy world where things are obviously looking up, the situation has become particularly acute in the real world in the last ten years or so. Things got so bad that in 2001, the African Union asked member countries to allocate 15 per cent of their budgets to health, while donor countries were urged to meet their pledge of 0.7 per cent of their GNP as official development assistance.

But Africa, being Africa, nothing happened. Even though the continent carries 24 per cent of the world’s burden of diseases, most of them preventable and curable, it has less than one per cent of the resources required to tackle the problem. In countries like South Africa, Kenya, Zambia and Tanzania which commit between five and nine per cent of their annual budgets to health, medical brain drain remains a major problem, especially in the rural areas.

In Ngige’s Nigeria, which commits 3.9 per cent of its annual budget to health, the State House Clinic where he once worked, can hardly dispense Panadol for a mild headache.

Ngige was not the only one whose teachers were foreigners. My Maths, Geography and French teachers were Ghanaians. But Ghana did not export them from a surplus. Just like in India, which he mentioned, the professionals “exported” themselves out of desperation. That has since changed not only in Ghana and India, but also in other serious countries where leaders come to power with a plan and a heart, and not as stooges enlisted in politics through their village shrine by some godfather.

Ngige is not totally wrong about the “export value” of professionals, especially medical doctors. According to a report by Time magazine in December, Cuba – the best example – earns about $11billion yearly by exporting its healthcare professionals to about 67 countries. But this did not come about from ministerial grandstanding. It was as a result of a half-a-century-old policy to train and use doctors as a diplomatic tool to overcome the country’s isolation.

It’s not unlikely that Ngige is fantasizing about the estimated $25billion that diaspora Nigerians are remitting yearly. He might do well to remember that according to an article in African Renewal, a 2011 research by a group of Canadian scientists led by Edward Mills, found that nine sub-Saharan African countries (Ethiopia, Kenya, Malawi, Nigeria, South Africa, Tanzania, Uganda, Zambia and Zimbabwe), lost $2.1billion invested in doctors working in destination countries up till 2010. In other words, the picture is not as rosy as it looks.

Let’s be clear. I disagree with Ngige for three main reasons: 1) his stats about surplus is wrong, 2) to present the problem as essentially a matter of monetisation is incorrect, and 3) his denial of the existence of medical brain drain is scandalous.

Doubling – even quadrupling – the number of doctors being trained today is desirable, but focusing on numbers alone is unlikely to significantly stanch the drain for a number of underlying reasons.

Ireland, a middle-income country, has been struggling with medical brain drain and is trying to halve its dependence on internationally trained medical workforce by 2030. It has doubled the number of doctors trained annually from 340 in 2007 to 725 in 2016, but it is still heavily reliant on foreign-trained doctors.

According to a study of 50 early career doctors published in February, between 2008 and 2014, 3,798 doctors migrated from Ireland to Australia, the UK, Canada, New Zealand and the U.S. The main reason for the drain is the over-stretched, under-staff and under-funded medical health system. It’s vitally important to address numbers, but we have to look beyond them to tackle the problem.

Even within countries, the disparity in access and ratios between urban and rural areas is wide; very wide. In Nigeria, Professor Olikoye Ransome-Kuti was the last health minister who paid any serious attention to medical care, especially preventive health, perhaps the single biggest health problem in rural areas. Vested interests in the medical profession who had their own ideas fought the minister, but he made his mark.

In a globalised world, younger doctors have the world to play. They can find more and better opportunities around the world and they think of themselves as global citizens. They scorn the traditional view that prioritises vocation over family and commitment.

They don’t see the point about “being married to medicine,” the love song of the older generation. If the environment does not value them; does not allow them to work and play – in short, to express themselves – they simply vote with their feet!

It’s hard for Ngige to understand that the world has left him behind because he’s too distracted by politics, including a needless fight with one of the icons of Labour Frank Ovie-Kokori, to face his job. It was clear from his body language that he was not prepared for the question. He should just have taken a pass, but the clown in him won’t let him. 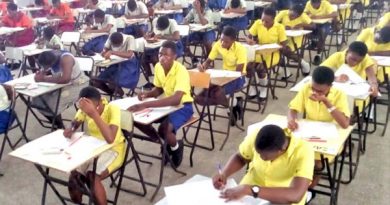 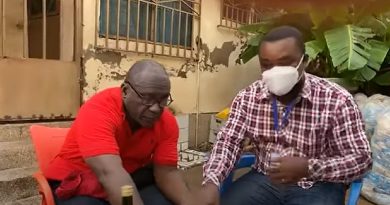 The Newly Posted Environmental Health Assistants/Officers of Schools of Hygiene, Ghana wish to bring to the attention of all stakeholders