Labour was the first price, the original purchase-money that was paid for all things!

Whereas, not only has the Labor of our heroes past been in vain due to the excessive looting of their pensions and arrears making them liabilities for their children, their families and society at large; the unemployment, the poor labour welfare, the fraudulent staffing/recruitment system, the underpayment and many anti-labour policies make Nigeria’s current heroes one of the most unappreciated workforces in the world.

How then do we serve with heart and might when it is glaring that our labours will be in vain? When workers neither get rewarded according to ability nor needs. How?

The high rate of emigration and brain drain in Nigeria’s work force is a testament of how underpaid and maltreated our labor force increasingly becomes by the day.

According to Voltaire, Work keeps at bay three great evils: boredom, vice, and need; thus, any pragmatic government would be interested in workers welfare to curb vices and encourage participation in Nation building

But then as a Nation, our leadership is unintentional and our representation non soliciting. The Nigerian worker have been trampled upon, battered, dejected, used, and molested in ways unimaginable whereas nobody selflessly stood up for the Nigerian worker in time of dire need and moment of constant despair.

We failed to realize that the effectiveness of our workforce either publicly or privately would determine how productive and progressive we intend to become as a Nation.

Young professionals are leaving in droves because everything in Nigeria will kill you, but then It’s obviously no longer news that our meritocracy places competent and intelligent workers below average workers who have political connections or would be ready to pay for promotion in kind.

In line with the passage of the #NewMinimumwage The intentional refusal to promote competent graduate and workers beyond entry level employee under the guise of contract staff is fraudulent and a bane to human capital development making it hard to effectively implement the new minimum wage.

The act of continual extortion of labor and many anti-labor practices MUST stop before workers really appreciate the beauty of workers day as a moment of reflecting on the many sacrifices made to ensure that work gets done in moving Nigeria forward irrespective of the many untold challenges. Our workers are indeed heroes whose labor we must ensure never go in vain.

How more denigrating is it going to be when foreigners treat our workers as slaves in our own country, while government whose duty is to protect the interest of the citizens and ensure quality welfare that reduces unemployment rate look the other way in exchange for bribes and benefit.

What law protects the Nigerian worker? how diligently is it implemented? These and many other glaring reasons negates our National creed. Our labors are toiling in vain, maltreated first by the government with non payment of salaries, the private sector by fraudulently shortchanging workers, and foreign companies especially those run by India’s and Taiwanese confidently maltreating workers without fear or remorse.

The Nigerian worker is overworked and underpaid. Job security is not a very good lexicon for the Nigeria worker who is constantly in search for greener pasture; whose government have failed over time and whose society places so many expectations upon.

In celebrating the resilience and doggedness of the Nigerian worker despite all odds, it’s important that we make demands, demands that are clear and within the whims of our constitutional right that the welfare of workers becomes prioritized for it was not by gold or by silver, but by Labour, that all wealth of the world was originally purchased. 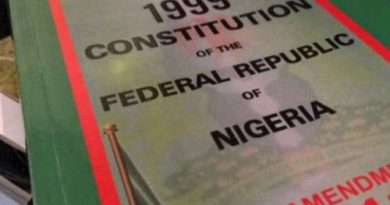 Military gears up to stop insecurity in 2021 — DHQ

They were born twin, never saw their father, never had mothers growing up, and never discuss Eid celebration with their