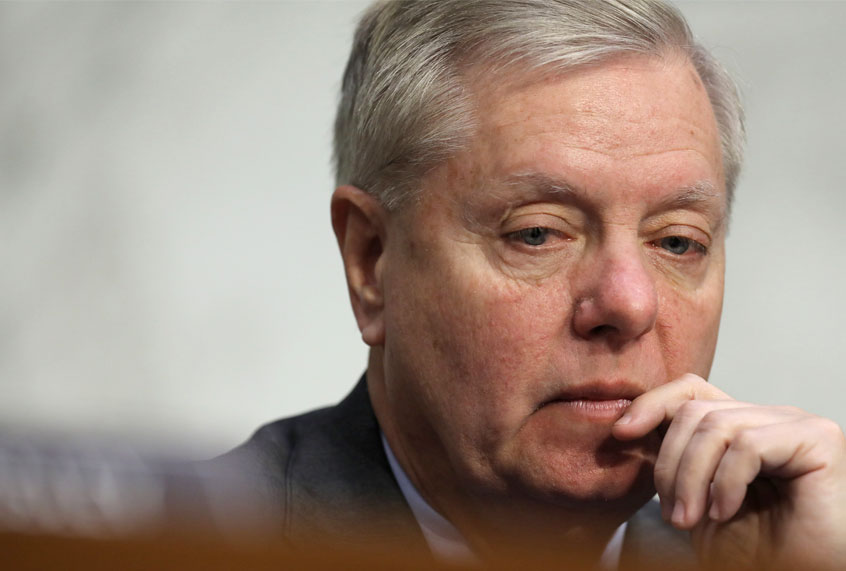 Three years ago, Sen. Lindsey Graham, R-S.C., told comedian Trevor Noah that Donald Trump’s grip on Republicans resembled that of former Ugandan dictator Idi Amin. “I just don’t like what he’s doing to my party and my country,” Graham said of Trump on “The Daily Show.” Three years later, Graham, who is now chairman of the Senate Judiciary Committee, appeared on television to excuse Trump’s apparent attempts to obstruct justice from the office of the presidency.

“It doesn’t matter,” Graham said of Trump’s steps to thwart the investigation, as outlined in special counsel Robert Mueller’s report. According to the results of Mueller’s two-year probe, Trump ordered his then-White House counsel, Don McGahn, to tell Deputy Attorney General Rod Rosenstein to fire Mueller in an effort to stop the latter’s investigation into Russia interference in the 2016 election and the subsequent firing of FBI director James Comey. Despite Mueller’s findings, Graham said that he considers obstruction allegations against the president to be “absurd.”

According to Graham, Trump’s attempts to obstruct justice are of no concern since they didn’t work. “I don’t care what they talked about. He didn’t do anything. The point is the president did not impede Mueller from doing his investigation,” the senator explained on “Face the Nation.”

As a onetime House prosecutor during Bill Clinton’s impeachment trial in the Senate, Graham, of course, took a notably different stance on congressional oversight of the executive and the need for impeachment.

“[Y]ou don’t even have to be convicted of a crime to lose your job in this constitutional republic,” Graham said in 1999. “If this body determines that your conduct as a public official is clearly out of bounds in your role …. Impeachment is not about punishment, impeachment is about cleansing the office.”

He continued: “Impeachment is about restoring honor and integrity to the office.”

One of the glaring problems with Graham’s hypocritical defense of Trump is that it completely ignores Comey’s firing and then Trump’s brazen statement that he dismissed the FBI head for daring to conduct an investigation into Russian interference in the 2016 election. That’s the entire reason why Mueller was appointed in the first place, because Trump impeded the first investigation.

It’s also clear that Trump impeded Mueller’s investigation when he dangled pardons in front of his former campaign chairman Paul Manafort, which resulted in Manafort lying to Mueller about the infamous June 2016 Trump Tower meeting with Russian emissaries under the false auspices of international adoption lobbying.

What Graham reveals is that the “law and order” Republican Party apparently now believes that if one builds enough plausible deniability into a criminal enterprise, it is entirely permissible to obstruct investigations and influence witnesses with impunity. With each passing day, Republicans in both Trump’s administration and Congress are making a mockery of our supposed system of checks and balances at the highest levels of government.

Lindsey Graham may be an apt spokesperson for the corrosive effects of this growing culture of impunity, but he is not solely responsible for its rapid growth and spread. It may be too late for Democrats, empowered only in the lower chamber of Congress, to hold the powerful accountable now. They refused to do so for years, out of fear of appearing overly partisan, and it’s not clear the horrible genie can be stuffed back into the bottle.

This is when Nigeria,my country was recognized by the white man.
Nigeria,we hail thee .our home and native land.
Gone are the days.😭😭😭😭😭😭😭😭😭😭😭 ... See MoreSee Less

Very sorry for you, you have lost it finally

The Western Regional Youth Organiser of the ruling New Patriotic Party, Benedict Addae has commended the Chief Executive Officer of