Samuel Ortom, Governor of Benue State, says there is no basis to return to the All Progressives Congress (APC) and as such, he has no plan to leave the Peoples Democratic Party (PDP).

Ortom said this in response to reports that he was nursing plans to return to APC.

The Governor decamped to the PDP during the build-up to the 2019 election, dumping APC under whose flag he had won the governorship election in 2015.

Speaking with newsmen in Makurdi, the Benue State capital, on Friday, the Governor said the rumour that he was dumping PDP was the handiwork of mischief-makers.

He emphasised that there was no basis for leaving PDP, saying that he is comfortable in the party.

“I have no reason whatsoever to leave PDP, the party that re-elected me. I am a card-carrying member of this party. I also built the party. I can’t go back to APC; there is no basis for that. There is nothing wrong with me in the party,” he said.

On the issue of insecurity in the state, he said he had liaised with security agencies to clamp down on anyone found perpetrating criminal act in the state by ensuring the full enforcement of laws against anti-cultism, robbery, kidnapping and the law prohibiting open grazing.

According to Ortom, in the course of investigation, it was found that the killings around the state have a lot of criminal activities associated with them, adding that both he and his Taraba State counterpart have come to an agreement that any citizen of the two states found perpetrating criminal acts should be dealt with according to the law.

The Governor urged the people of the state to remain calm, saying his administration would not give room for any criminal element to run over the state in any way. He also appealed for useful information to guide the security agencies.

Ganduje Speaks On “Dollar” Video, Vows To Deal With Those Behind It 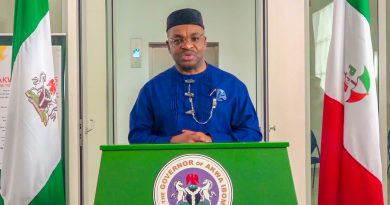