All through history, most importantly from the agricultural revolution to the modern age, there has been the proliferation of economic parasites who are known as the ruling class. These elites have over several epochs made themselves fat while contributing little or nothing to production. This class have simply annexed the wealth created by the sweat of the wretched of the earth.

However, the Nigerian political class is gradually making the greediness of historical ruling classes a child’s play. Days ago, the media space was awash with the news that the Bayelsa State house of assembly has approved a new life pension for themselves. This package includes 500,000 monthly for a former speaker, Two hundred thousand naira for a former deputy speaker while a former floor member would smile to the bank with one hundred thousand. This is in continuation of several political pension acts across the federation as Bayelsa is just a subset of the rot.

From Lagos to Akwa Ibo to Rivers and across the 36 states of the federation, the political class after looting and milking the state commonwealth dry has found a way irrespective of political party affliation to provide themselves with a source of free money. This entitlement bestowed on them because of four years in office encompasses millions of naira every month, luxurious cars and houses, politics can’t be that rewarding in any part of the world.

In contrast, the average Nigerian worker 35 years in service gets peanuts which are irregularly paid. In fact, the contributory pension scheme have been a way to defraud the workers as the money is not duly remitted after being deducted from the average worker. These raw facts testifies that we have the greatest parasites in history – the Nigerian political class.

It seems that the Nigerian political class would milk the nation to death so far as there is a named country to rule on. Across states, the economic downturn has been the excuse for irregular and haphazard payment of salaries even though they won’t bulge on cutting down their own allowances and running costs.

With a dwindling revenue base and an ever expanding base of serving former governor presidents, governors, legislators, PAs, SAs, SSAs taking a huge chunk of the meagre revenue, the fate of the country is certain that we are heading towards the abyss.

Unfortunately, the present crop of national assembly members and their primary school styled state house of assembly accomplices would do nothing to save us from themselves . We might have to look inward for redemption, the Sudan or Algerian might be on us because with the renewed vigor of our parasitic ruling class, 2023 might be like waiting for eternity.

Bright Ogundare is a social commentator. He can be contacted via [email protected] 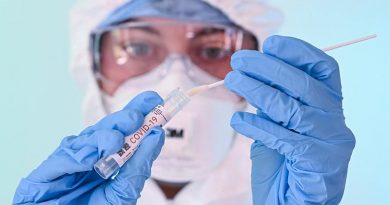 Some 97 new COVID-19 cases have been confirmed. This brings the active case count to 533. The latest figures from