Any graduate of a Nigerian University can attest to the fact that one of the most demanding courses is Medicine. It takes the longest duration to complete and requires total concentration with discipline thus earning Medical students the reputation of bookworms. Many have reached an advanced stage to be dropped by stringent academic standards.

A medical student lives in the midst of books. He is always surrounded by a world of diagrams, charts, big books and has to constantly go through these material.

Following this sort of academic stress, what the Medical Student is offered in today’s Nigeria as a vocational suggestion is farming or tailoring which s/he could have learnt at home or in some institute without the stress of cramming all sorts of words and cutting through cadavers for several years in Medical college.

According to the World Health Organisation, Nigeria needs a ratio of 1 Doctor to 600 people. The present ratio is way above that with Nigeria needing 303,333 Doctors to meet this requirement but presently has below 40,000. The ratio now exceeds 1 Doctor to 6,000 Nigerians.

The Minister of Labour, Dr. Chris Ngige in his remarks claimed Nigeria had more than enough Doctors. From a point of view which favours Dr. Ngige, Nigeria has more Doctors than the available standard quality medical facilities in the country can take as staff simply because we have too little of these facilities to cater for the population of Nigeria which stands at close to 200million.

There is a resulting unemployment for Doctors who despite the plentitude of patients are denied that medium of  hospitals and clinics with which to reach patients. The Medical Doctor cannot hawk his services on the streets. He needs that edifice where the patient is admitted, goes through tests and where the Doctor can function. A lack of these facilities are what makes it appear to Dr. Ngige that Nigeria has enough Medical Doctors.

The truth remains that availability and access to Health Care is poor in most areas of the country especially in the remote or rural areas. The Minister of Health, Prof. Isaac Adewole admitted to this point when he claimed that there was a concentration of Doctors in Urban areas and few in the rural parts.

Dr. Chris Ngige is wrong when he says we should ‘export’ Doctors because we have surplus. We need these Doctors. Unemployment and brain drain in the health sector is not due to sufficiency in Healthcare services in Nigeria. It is due to insufficient mediums to provide Healthcare services.

As at 2017, Nigeria had the third highest child mortality rate in the world. 1 out of every 10 children or 100 out of every 1000 would not live to adulthood as the statistics reflect. According to the World Health Organization, 300,000 die from malaria every year and 215,000 die from HIV/AIDS. 97percent of Nigeria’s population is also prone to malaria. Nigeria has the poorest sanitation system creating fears of outbreaks. Typhoid, cholera, cancer, diabetes, hypertension and several other diseases claim the lives of Nigerians in millions every years.

With the figures still high in deaths and those susceptible to disease outbreak without instant medication and the lack of emergency ambulance response across the country, it is not proper for the Minister of Health to suggest that Doctors take to tailoring when their skills are still required while the Minister of Labour suggests that Doctors can leave the country because they are in surplus.

Dr. Chris Ngige rounds up his argument on Nigeria not needing Doctors by claiming they can travel abroad to gain experience and acquire wealth which they would send home that can become foreign exchange. He also suggests that they can come back to invest in the country through private practice like a friend of his(the Minister) has done.

Dr. Ngige appears like he has a point in the previous paragraph. It is true there is a need for global knowledge and exposure in the medical field. However, why does Nigeria not seek instead to train her Doctors to that level in the long period of time they spend in school?

Ngige’s arguments reek of what Afrobeat legend Fela would have called “colonial mentality”. In the country of Cuba, the country has a lot of skilled Doctors and even exports their services especially during periods of humanitarian crisis without necessarily having to send them to sharpen their skills anywhere.

The argument that they would also invest in local healthcare by coming back to build their own hospitals shows that Dr. Ngige as Minister of Labour is aware of the little opportunities available to Nigerian Doctors to raise capital to fund private practice and hence suggests that they travel out to gather money. Is he admitting to failure of the government in remuneration of Doctors in Nigeria so they cannot establish private hospitals if they stay in Nigeria?

Dr. Ngige rounds up his argument with the claim that Doctors will send money home and it becomes foreign exchange. Here is another admission of the Minister of Labour that Nigerians at home may not be productively engaged or employed and would be requiring stipends for upkeep from relatives overseas.

Dr. Ngige’s highlight in office has been handling the ASUU strike. The Union is again threatening to strike making one wonder what work Dr. Ngige has done as Nigerian Students may be academically stranded like they were for an unduly lengthy period of recents. (Perhaps, Dr. Ngige would suggest the same travel-out advice to students since we have surplus).

The NMA(Nigerian Medical Association) and other professional medical bodies have come out in condemnation of Dr. Ngige. His was a careless statement that threatened not only the soul of the medical profession in Nigeria but also the health of Nigerians should the few Doctors we have decide to take his advice.

The Minister of Labour and Productivity has threatened productivity with his last interview. In conjunction with earlier statements from the Minister of Health, one can trace the reasoning of the government of the day and finds quickly why it has done little to address the daily pressing concerns of average Nigerians.

Koye-Ladele Mofehintoluwa writes from Obafemi Awolowo University. He is a Civil Rights Activist. A Public Policy and Economic Analyst. A commentator on political and social trends. Legal opinion contributor and Opinion essayist with several reputable print and online media such as Premium Times (Campus Reporter), Sahara reporters, Lawyard.NG and several other outlets. He can be reached on 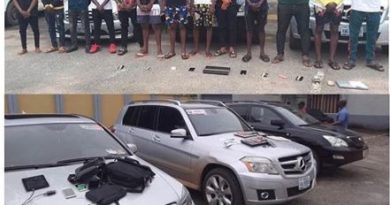