Yes, history is important because those who abandon their history are bound to repeat their dark pasts. While we need to teach our children history, we must be honest with the story we tell and not deceive younger generation with lies often written by politicians and top public office holders.

History is meant to teach us lesson about mistakes of the past to resolve our problems and should for no reason be manipulated by any individual and institution.

On April 17, the Nigeria Army took to its official Twitter handle that: A book titled The Legend of Buratai will be officially presented to school children on May 4th, 2019 at the FCT Library, Abuja.”

Explaining why the book became necessary, the author, Dr Abubakar Mohd Sani said it is to immortalize the life of Lt General T.Y Buratai, the Chief of Army Staff.

“The Legend of Buratai is a first and foremost a work of fiction that I hope will make primary and secondary school students to fully appreciate the life of General Buratai, one of the greatest infantry Generals to ever emerge in Africa”, he said. “The book will be presented to school children in Abuja, Lagos, Maiduguri, Kaduna and Yola. The book has already enjoyed so many good reviews by national and international scholars.”

Before then, Igbinedion University in Edo State had named its Centre for Contemporary Security Affairs after General Tukur Buratai while Ebonyi State University also named its Institute for Peace and Strategic Studies after him.

But, should we tell the story of Tukur Buratai without mentioning his many sins? No, the book is not complete except we also document how Boko Haram and bandits are killing innocent citizens under his watch.

Except we include how Boko Haram killed over 100 soldiers in Metele attack last year under the watch of an acclaimed legend. It took condemnation from the public before the Army officially admitted that its troops were killed.

Except the book includes how soldiers were used by politicians in the recent elections held across Nigeria and why he (Buratai) is yet to provide evidence to counter facts about his asset declaration scandal.

A Premium Times report revealed General Buratai’s illicit acts and how he illegally owned property in Dubai. Rather than tackle the issue raised against him, the acclaimed legend (Buratai) charged his men to storm the newspaper’s office to illegally arrest journalists. Could all these be criteria to be a legend in Nigeria?

Except the book reveals many sins of General Tukur Buratai, it will be disastrous for children to read such PR publication.

Why Silence Of Buhari’s Aides, Garba Shehu, Others On Killings In Oyo Community Is Suspicious—Bode George 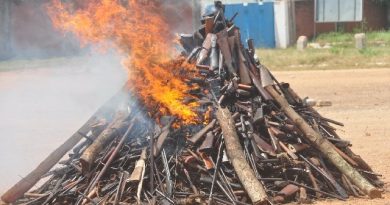