Rotimi Akeredolu, Governor of Ondo State, has a special message for his political persecutors — but it’s not one just anybody can understand.

On Friday, multiple sources in the Ondo State chapter of the All Progressives Congress (APC) confirmed to SaharaReporters that Akeredolu had been suspended by the national leadership of the party.

Earlier, on March 1, SaharaReporters had reported how the National Working Committee (NWC) of the APC queried Akeredolu over his “glaring anti-party activities, which greatly affected the fortunes of our candidates in the recently-conducted presidential and national assembly elections in the state”.

“It is true; the Governor has been suspended from the APC due to anti-party activities after he was issued a query by the national leadership of the party over anti-party activities,” a leading member of the party had said. “Although the APC at the national level has not made an official announcement, we are 100 percent aware that he has been suspended.”

A second APC source in Akure, capital of Ondo State, who also requested not to be named, confirmed the suspension, telling SaharaReporters: “I can confirm to you that Akeredolu has been suspended from the party over anti-party activities and many of his commissioners in the state are aware of this already. Well, maybe they don’t want to tell you the truth or they are all afraid.”

A day after the story was published, Akeredolu took to his official Facebook page to write, in Yoruba and all in caps:

This, loosely translated to Yoruba, means:

“Will all fall behind destiny.

“Predestination has no cure.

“The creator already has His say.”

The post was made on Sunday. However, when SaharaReporters checked back on Tuesday morning, it had been deleted.

This isn’t the best of times for the lawyer-turned-Governor, as only on Monday, multiple party members told SaharaReporters about their anger with the Governor’s decision to withdraw campaign vehicles he gave to them as donations in the lead-up to the general election.

The Governor’s aide on political matters denied it, though, saying the vehicles were not really “gifts” but were only given out to aid campaigns and were meant, from scratch, to be returned. 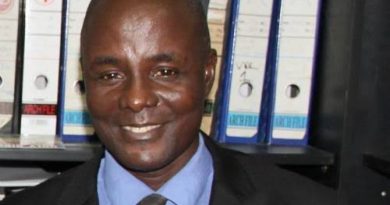 Will Nigerians Soon Wipe Out Each Other? By Ugochukwu Ejinkeonye