Last week Katsina State stood still as it mourned the passing of one of its most illustrious and respected sons. Born on July 2nd, 1929 in Katsina, Justice Mamman Nasir, a former Minister of Justice and Justice of the Supreme Court of Nigeria, passed away on April 13th, 2019 after a brief illness. With his death, Nigeria has truly lost a treasure.

The day that Justice Nasir died was a day that saw less love, less compassion, less light in Nigeria. He leaves us a solid message of service, virtue, duty and solidarity. The witness of his life was a model of integrity, kindness, simplicity, humility, piety and charity. He was part of the incorruptible generation and popularly known for his stern defense of his honor and principles.

In his lifetime, he had a successful, accomplished and distinguished career. As a student, he went to Kaduna College and later attended the University of Ibadan, where he obtained a certificate in Latin. He then embarked on a Bachelors degree in Law at the Council of Legal Educationin 1956. In that same year, after he was called to the Bar, he was appointed a Crown Counsel.

From 1961 to 1966, he served as Northern Nigeria’s Minister of Justice and as Solicitor-General for the North Central State Government. In the aftermath of that, he became the Director of Public Prosecution, Northern Region in 1967, the same year he was appointed Solicitor General, North Central State. In 1975, he was appointed to the bench of the Supreme Court of Nigeria as Justice. He then went ahead to become President of the Nigerian Court of Appealin 1978. He retired in 1992 and ascended to the throne of Galadima of Katsina, which was conferred on him on May 9, 1992.

The news of Justice Nasir’s death is very sad. Nigeria shall miss him, with his warmth of spirit, his ability to talk about duty to country, faith and the prayer life, which brings God so close to us. At the same time we give thanks to Allah for the wonderful examples and memories Justice Nasir leaves us: his commitment to daily prayer and his selfless duty to his beloved country. He leaves to all of Nigeria a legacy of faith and love and of concern for the people in the name of The Almighty. He will be deeply missed in our efforts to build national peace, and a just, caring and equitable Nigeria. This was a feat that so bothered and moved him.

All the life of this great man was the bright incarnation of service to the high humanitarian ideals of goodness, compassion, selflessness and faith.

During the cause of his life, he never ceased to remind us that the greatest poverty of all is to live and to die without faith, with no integrity and unloved. The simplicity of his lifestyle and the singlemindness of his dedication will serve as an example for generations to come. Believing in the power of Allah’s grace, which directed his life, each of us, relying on the same grace, can reach so many of the achievements that he achieved.

He was a humble man with unbelievable generosity toward mankind; an accomplished public servant; and a dedicated, tenacious, and brilliant legal mind, who spent his entire professional career working for the betterment of his country.

Justice Nasir’s life proved that the only real revolution in human affairs flows from service to others and self-sacrifice out of love for country and unconditional devotion to The Almighty. He was a champion of truth and an example of selfless devotion to charity. He was the genius of the little way of doing great things. Above all, he was, in every sense, a man of tremendous faith: strong in forgiving, tender to the poor, in love with his Deen, and a servant of Allah. We must give thanks for having had Justice Nasir among us.

Today, on the occasion of his passing into eternal life, we are moved to remember the impact of those achievements he had in life, the moments he spent with us, and how his living example will continue to resound in our history books for all time. Justice Nasir’s brilliant and good work will always be remembered, everyone must know and admit that, but more deeply still, we will remember the abundance that shone from within him and his service for his beloved country; service that was fueled by absolute dedication to His Maker.

Summing up his life, those who knew him will always reiterate and come back to one thought. Never will you meet a man who more faithfully lived his values. His kind was rare. He was a teacher of all things. His method was simple. He taught by example. His character is the foundation of the conscience of many of those who came into contact with him, who worked with him and who were part of his life. His teachings are endless. He was strong in body, in spirit, and in commitment. He fulfilled every obligation he ever undertook. His word was his bond, and everyone knew it. He was loyal. His faithfulness to the people he interacted with during his lifetime could be seen in the way he steadfastly maintained ties with anyone he ever knew. He had a quiet dignity, respecting himself the way he respected others. Although he is no more, today, however, we have the privilege of celebrating someone who epitomizes leadership; someone whose life reflects a heart of service and commitment to faith, family, friends, and certainly those who strive to follow his example.

Justice Nasir will long remain an inspiration to those who would serve their country, and we are blessed to have shared the gift of his life with us all. I am so proud to come from the same State as him. He makes Katsina proud and he will always make Nigeria even prouder. He will not soon be forgotten. His reward will be great in Heaven. We pray for him and for those who knew him.

To all who loved him; his staff, assistants, neighbors, colleagues, admirers, friends and family:

“May the Almighty reward you and help you to apply patient endurance and appreciation. Indeed our spirit, possessions and families are magnificent gifts, which God has loaned us for a period and he takes them away after the termination of that period. Gratitude becomes necessary when He gives, and patience is mandatory when He takes. Justice Nasir, your boss, neighbor, friend, colleague, brother, father, husband and son was from among that great gift which God allowed you to enjoy in a way that was fortunate and gratifying. Although you loved him, his place is with his maker now. As he has gone home, it is your duty to show patience in his death and gratitude for his life.

May the Almighty augment your recompense, be kind in your misfortune, forgive the deceased, encourage you with endurance and give you peace. I pray you have the fortitude to bear his loss.”

As we witness another twilight for Nigeria and the death of another sitting Nigerian president, I pray that God forgives and has mercy on the soul of Justice Nasir and makes honorable his reception. May Allah keep him safe and sound, protect the place where he has rested and make his entrance wide; bless him for his good deeds and surround him with a garden filled with beauty. May he receive the gentle blow of a cool breeze, be washed with snowflakes, ice, sleet, water and everything pure and cleansed of sin as a white cloth is purified perfectly. I pray Allah admits him to Paradise and may his grave be spacious and filled with light: Amen. 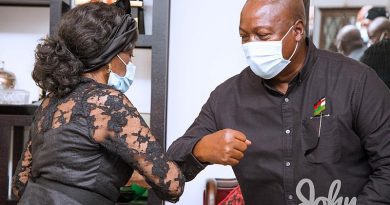 A teacher at the Accra Girls’ Senior High School and the spouse have contracted covid-19. The latest confirmation is in

The 5 Beauty Products ELLE Editors are Obsessed with This Week