Capitalism is very lucky! The system of greed and power. While it continues to put the world into crass barbarism, many wonders emerge within the globe as animals, plants, and humans greasing our pains and making our ribs dancing.

One of these wonders is sports. Many people find great succour in sports, away from the hustling and bustling which the capitalist system has imposed on us. And in sports, football remains the most massive.

Many adverts place football over politics in terms of the role it plays in uniting the world. You hear phrases like “nothing unites more than football” and many more.

But this piece will focus on the player that is so genial and thrilling the world with his arts and skills. That player has been compared to Pele and Maradona.

Rivaldo, one of the greatest attackers the world has ever seen, has posited that Messi already deserves the Ballon d’or even if he doesn’t win the champions league as he has scored 45 goals playing 41 matches.

I agree with Rivaldo. Many football fans tagged the last Champions League encounter between Manchester United and Barca as Messi vs Man Utd! In fact, the popular gospel comedian, Woli Arole dramatically organized prayers for Man Utd before the match. And expectedly, he had to comically admit himself in a literary hospital to satirize the outcome of the match.

One thing was distinguished as the match came to an end. Both Messi and his biggest rival C.Ronaldo had scored in the separate but simultaneously played matches. CR7 scored a brilliant header against Ajax but his side Juventus lost. Messi got a brace but Barcelona won. While CR7 was the top striker for Juventus in that encounter, Messi played deep in as a roving playmaker. The Argentine wonderkid is more of a team player than CR7; the modelling player whose signature individualism wrecked Real Madrid after his exit last season. The Bernabeau has been solely built around CR7 and the team concentrated much on him. This has affected Juventus too. A ball-keeping team excels more on collective method of play than on individualism. This is the brilliance that the youthful team of Ajax displayed from start to finish in that legendary encounter.

Leo Messi has almost all the traits of a footballer and he has them exceptionally.

He is a very meticulous defender. He joins the defence especially during counter attacks.

A fantastic midfielder. Messi has 20 assists this season alone and has always been competing with greats like Xavi; Iniesta; Ozil and Eriksen for the past decades in the number of passes.

Leo is also in the class of Okocha; Maradona; Ronadinho; Neymar; George Best; Denilson, and other legends when it comes to beating other players while holding the ball. He is a great dribbler who combines speed and  cunny body movements with his dazzling artistry.

Leo is also a freekick specialist whose signature panenka freekicks amazes the world generally. When the goals from the freekicks were turning the lionic player into a god, Pope Francis immediately cautioned against the goddification of the enigma on the green grasses.

One would have to conclude that Messi is a talent that is human. He smokes and drinks. He loves tattoos and also party. He plays computer games and also mingles with politicians. His dedication to Barca is very exemplary. He, like other Barca greats, supports the quest of the Catalans for self determination.

On the field of play and outside, Messi is very tolerant. He plays for others and the team. Selfless and very fair. He is an embodiment of many positives. His modesty and humility is also exceptional. This does not take his ruggedness off. He fights ruthless and unfair defenders. Unlike Mohammed Salah who wept after his arm was injured by Sergio Ramos at the last Champions league final, Messi would have fought back or protest.

While I want tikitaka to win the next champions league, I am happy that Messi has vindicated we who love him by capping the great exploits for the past three seasons snubbed, with a victorious momentum.

The world is in pains and at war. The people have the right to their joy and happiness. They need to be drawing inspirations from the great exploits of a player like Messi so that they would be as resilient and skillful in smashing the old and building the new. And just as that Nubian Queen Alah Salah is inspiring Sudan to real change, poets and other talents need to brace up to so same in South Sudan, ignoring Pope Francis’ kissing the legs of President Salva Kiir. 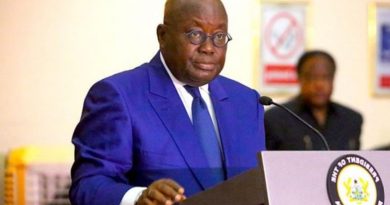 A 60-years-old man, Mr. Job Kwansah Mbia, has been arrested by the Kasoa DOVVSU police command for allegedly sodomizing and