Nigeria is the “giant of Africa”; a self-given title we take so much pride in and always in a hurry to rub on the faces of other African countries when necessary, and when not. We remind them of our population strength, huge land mass, natural resources and various past glories. But we know what it is; a PR strategy championed by our leaders to give a good impression of the country to the outside world. However, we come back home to face the reality; we are just another African country, though with large population and natural resources, yet struggling with providing the most basic things to the citizenry. In reality, we are not the giant of Africa and we know it. If anything, we are a major African dwarf.

Being born in a country in most parts of the world is a blessing. I’m sure an average Nigerian has a different opinion. I know because of the rate at which many expecting mothers rush to give birth in the US and UK just so their babies could be citizens of those countries. The risk, cost and stress notwithstanding. On the other hand, I don’t see or hear of people coming to give birth in Nigeria to claim Nigerian citizenship. Or do you know anyone? I see how many Nigerians on social media rush to indicate interest on any post that has something like “how to migrate to Canada/US” as its title.

I was born in Nigeria in the early 90’s to a typical Nigerian home. Growing up was tough but my parents were on top of their games to make sure we got all we needed. That’s why I had a little problem with that Ozzy’s tweet. From a young age, I understood that it’s the responsibility of the citizens to protect themselves. Yes, we all know God is the protector of everyone. But we as humans have to put in some efforts too. But as a tax-paying citizen, that effort becomes the responsibility of government in saner climes. Nigeria definitely doesn’t fall in that category. I know this because I grew up seeing my parents pay a stipulated amount every month to the Vigilante group responsible for securing our street. How this is not the responsibility of the government through the various security agencies didn’t occur to me then until later. With time, I came to realize that I’m a Nigerian and it’s my own responsibility to protect myself. The recent killings and kidnap in Zamfara and the resignation of the governor as Chief Security Officer of the state say it all. Does anyone know why he has not been impeached already? I guess it’s because we are Nigerians and we don’t exactly have the power to decide who rule us.

it’s also in Nigeria that we have trigger-happy, “blood-sucking” vampires as policemen. The recent killing of Kolade Johnson and several other similar cases in recent past attest to this. I’m probably the only Nigerian youth that has never been harassed or assaulted by men of the Nigerian Police. This is most likely because I don’t drive, don’t stay out late, I have no dreads, no tattoos, no earring and other Nigerian police red flags. Should we now tell every Nigerian to live the life I personally chose for myself just to avoid Police harassment? Certainly not, because the last time I checked, none of these contradict any part of our constitution.

Power is still a major challenge for the “giant of Africa”. Sometimes, I imagine how hard it would be for me to adjust to staying in a place where there is constant power supply. I’m sure an average Nigerian on the street would think that should only be possible in heaven. But no, you don’t need to embark on a journey to the world beyond to see uninterrupted power supply because that is the reality of most countries around the globe, including Ghana. Ghana here o. Whereas, here in Nigeria I constantly have to choose between enduring the noise from generator or sleeping in the heat. I have to choose to either spend my money to buy fuel to watch a football match or go out to watch it at my own risk.

It’s such a shameful thing that a country which prides itself as “African Giant” can’t provide these basic amenities to her citizens. Talking about shame, I wonder if Nigerian leaders understand that word. Sometimes I feel this second-hand embarrassment for our leaders when they are in one of those comity of nations’ meetings. How they don’t feel nothing themselves still beat me.

I reside in Lagos, the undisputed headquarter of traffic jam in Nigeria, or Africa, or the world. An average Lagosian spends 2-hours in traffic every weekday. Let’s do the maths. There are about 22 weekdays in a month. 2-hours multiplied by 22 days gives you 44 wasted hours on the road every month. The legendary Mike Okri’s song “Time Na Money”, a metaphorical expression of the significant role of time in making money comes to mind at this point. Going by that, only God knows how much money Lagosians lose everyday to traffic.

Lagos is broadly divided into two – Mainland and Island. Every morning, millions of Lagosians move from either of these “Lands” to the other using three major bridges – Third Mainland Bridge, Eko Bridge and Carter Bridge. These bridges are not enough, but manageable. But because we are Nigerians and we deserve hell as far as our leaders are concerned, they thought there is no better location to use as trailer parks except these bridges. I guess this is part of the plan as contained in the famous blueprint of Lagos by the “head nigga” in charge. So buses struggle for space with static trailers everyday, wasting time and energy on the road and causing extremely low productivity at work. Many have joked that most Lagosians work on the road and rest at work.

Talking about joke, we are Nigerians and we joke with everything. We were once named the happiest people in the world and there is no doubt about that. We find funny angles to everything and situation. Good as that is, it’s one of our problems. Most tweets on twitter are to ride on a trend, get likes, retweets and followers, and not a genuine attempt to address situations. Since that is the intention, our youths focus energy on sounding savage and creating memes to get the gratification they desire. The result of it is we have people talking about issues on social media but no corresponding action to back it up in real life.

As Nigerians, it is bad to be rich. Poverty is such a good thing for members of the public. We have leaders who constantly remind us of this with statements like “I’m poorer now than before I got into power”, “Nigeria should live within their means” and the likes. They constantly give the impression that anyone who is rich must have made the money through illegal means. Ironically though, they look away when there are clear indications that their allies are perpetrating the same corruption they claim to be combating.

The fight against corruption is arguably the biggest political scam in Nigeria since we spent billions generating darkness. No doubt, corruption is one of the major problems of Nigeria. But should we now focus on that one thing and forget about everything else (the economy especially)? Maybe the real question is are we even sincere in this “fight”?

It is clear at this point that it’s the fault of our leaders that we find ourselves where we are today. However, I think it’s high time we moved past expecting them to fix things for us; “that meins we will sleep dia”. The state of things now favours them so they are not going to try to fix it. The question is does it favour you, the ordinary citizen? I know your answer is no. I know because I feel exactly what you feel. Since we are all on the same page, then it’s about time we took the fight off social media and get serious. Unlike some guy in Zamfara who claimed to be “getting a little pissed”, me “I’m Seriously pissed” and I’m sure you are too. The time is now. No sidon look. 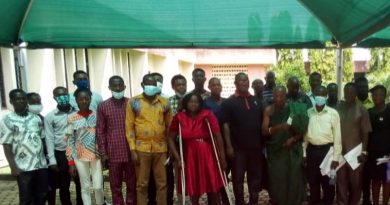 Progressives praise early Biden picks, but worry his team is stacked with “corporatists”

Reverend Cannon Clement Azure, Dean of the Bishop Aglioby Memorial Cathedral of the Anglican Diocese of Tamale has admonished Christians