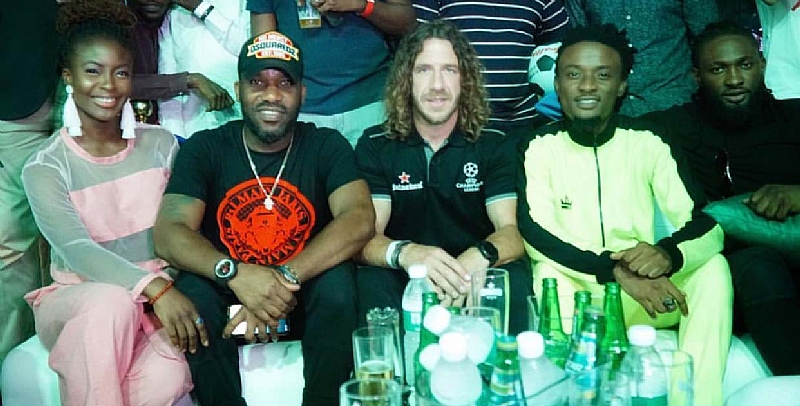 The three-day UEFA Champions League Tour which began on the 16th of April, culminated in a lush Lagos Party at Cubana, Lagos on the 18th of April. The night was a roll-call of celebrities in honour of Carles Puyol, the Spanish football icon and former captain of the Barcelona Football Club who has been in Nigeria for the coveted UEFA Champions League Tour presented by Heineken®.

With celebrities like Stephanie Coker, Folu Storms and Uti Nwachukwu, the stars turned up the heat of the football fever in the mega-city of Lagos, Nigeria’s entertainment capital.

Expectedly, the guests had a thirst-quenching fill of Heineken®, ice-cold and crisp after a long tour-filled day with the coveted trophy beneath the hot weather Lagos skyline.

With the Heineken Limited Edition bottles tucked away in several of the luxury bars around town, the night of football frenzy is the climax to the events of the past three days which included the State House visits in Lagos and Uyo, consumer events, after parties, tour of the Lagos Brewery of the master brewers Nigerian Breweries Plc and of course an unmissable football match that featured Puyol and Nigeria’s former attacking midfielder, Austin ‘Jay Jay’ Okocha as captains of each team of stars.

In his remarks, the Managing Director, Nigerian Breweries Plc, Jordi Borrut Bel reiterated the support of Heineken® for one of the world’s most important soccer event.

He said, “Heineken® has been a big part of football for the last 25 years, particularly by sponsoring the UEFA Champions League. During this time, we have been able to connect with our consumers giving them the opportunity to connect with club football’s biggest competition while also rewarding their passion by taking some lucky few to Europe to watch the semi-finals and finals live.”

The UEFA Champions League Tour presented by Heineken® lived up to its billing and surpassed expectations in every way. Heineken® continues to demonstrate its commitment to providing life-changing moments for its consumers by being at the cutting edge of football as well as other forms of premium lifestyle and entertainment experiences.

Fuel price goes down further to N121.50 per litre

Still On ‘Made In China’Outside The Box By Alex Otti

COVID-19: AAMA Donates To Some Institutions

The Atebubu-Amantin Municipal Assembly has presented a number of veronica buckets, liquid soaps, hand sanitizers, and tissue papers to a