Penultimate weekend  the east-central African nation of Rwanda marked 25th anniversary of the very worst man-made cataclysmic event in her national history — genocide anti-Tutsis. In April 1994 following the tragic crash of the presidential flight that killed the then Hutu-born President Juvenal Habyarimana and the then Burundian President Cyprien Ntaryamira and a host of others aboard an organized genocide against the Tutsi minority population began in horrible earnest. In the end close to a million Tutsis and some moderate Hutus were butchered to death in an aggressive vengeful killing spree described by witnesses as the satanic-inspired wild exhibition of the black man’s penchant for the primitive, for the abominable.

The late President Habyarimana had attended an official function outside his home country and was home-bound when suddelny the grim reaper came calling in a violent manner. Before his ‘borrowed’ presidential plane could land in Kigali a powerful anti-aircraft missile fired supposedly by enemy forces hit the executive jet forcing it down in smithereens! The Rwandese President who was being accompanied home by his Burundian counterpart and every other person on board were blown to pieces like the jet itself.

Soon after the chilling news of the gory incident hit the streets spreading like wild fire the streets of Kigali were deserted for fear of the unknown. The state-owned radio and TV stations were inundated with appalling hate speeches and direct calls for vengeance by the Hutus against the Tutsis. And before anyone could do anything in terms of appealing for calm, concord or harmony the blood of the innocent had started flowing.

In the end, after three to four months of barbaric rage and blood-letting, close to a million Tutsis (and moderate Hutus) had been slaughtered in a particularly gruesome manner like wild animals! Pregnant women had their protruding tummies ‘operated’ upon with sharp objects on the streets, people were mindlessly hacked to death by a hate-filled gangs, houses were burnt down at wee hours of the night with folks sleeping therein.

Prior to the commencement of the genocide historians had noted the fragmentation of the society along ethnic lines. Besides, conclusions were reached that the deliberate wicked calls for annihilation of an ethnic group by another had aided and abetted the success behind the massacre. The Tutsis were condescendingly described as ‘rats’ and ‘cockroaches’ worthy of total elimination.

And the international community did not do much to halt the pogrom. It was as if the gate of hell was opened forth and demons of war were unleashed on defenceless unarmed civilians with no functional authority in place to impose order.

Twenty seven odd years prior to the Rwandese genocide a similar gory incident had happened in Nigeria during the Nigeria/Biafra civil war. In 1967 the late Chukwuemeka Odimegwu-Ojukwu had declared the Biafran Republic unilaterally yanking off the entire eastern region from the rest of the Nigerian nation. The 1966 coup d’etat and consequent counter coup led to societal division on ethnic fault lines. Following the counter coup orchestrated and executed by mainly northern military elements the Igbos up north were being killed indiscriminately by their hosts. And that led to the Igbo exodus to the hinterland or their ancestral homes.

The then Nigerian Head of State, General Yakubu Gowon, in his youthful exuberance much like the late Ikemba Ojukwu, had declared war against the seceding Igbos (Biafrans). The Aburi Accord signed in the neighbouring Ghana encountered discord as the signing parties returned home renouncing same. Three years of war followed and more than three million Biafrans were killed by the enemy forces, hunger, starvation, diseases or whatever!
The Tutsis in Rwanda are like the Igbos in Nigeria: enterprising, intelligent, rich, strong and republican. In Rwanda the Hutus hated them for their gut and cultural heritage. In Nigeria the Hausa-Fulanis hated the Igbos for their gut and cultural heritage as well. That is why like in Rwanda the Igbos are systematically marginalised and excluded criminally from assuming the presidency.

But a new great Nigeria would be born, rich in her restructured prosperous corporate entity, when the Igbos are given the chance to prove their mettle at the power apex. And when that historic era dawns, later than sooner, Nigeria would be ‘healed’ of her tragic nationhood malaise.

Biafra failed quite alright as the Igbos are still today grudgingly part and parcel of the Nigerian federation. But today the Biafran dream still lives on! The idea behind Biafra, even when the great man behind the original concept is no longer with us in flesh and blood, may never die given the prevailing injustice and marginalisation being visited on the Igbos.

Twenty five years after Rwanda has changed for good. The Tutsis like the Igbos are soldiering on with their lives embracing the future, remembering the past and never forgetting. The capital city, Kigali, is reputed to be a very clean city worthy of tourism. There is democracy with President Paul Kagame as the strong man in the mould of the Russian Vladmir Putin. The Hutu/Tutsi ethnic tension has died down considerably. The economy is not doing badly compared to the continental standards.

Quarter of a century after the Rwandese genocide and half a century and two years after the Biafran pogrom we collectively mourn the dead and the missing. And exhort the living to live and let live!

Between Rwanda and Biafra humanity in general and Africans in particular demonstrated, yet again, our collective capacity for pure evil. But before we lapse into convenient forgetfulness we must continue to remind ourselves, with culpability in mind, about the imperative of love and unity! By loving one another and uniting our forces for the common good we can make this beautiful (yet blood-soaked) planet we know better a better place to live in. 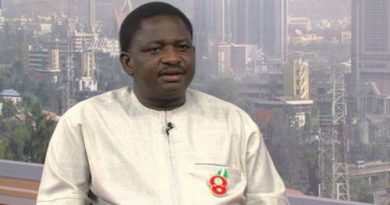 Femi Adesina: A Witness In The Court Of Posterity By Dr Bolaji O. Akinyemi

The third phase of the national market disinfection exercise is currently underway in the six districts of the Ahafo Region.