There are byzantine vibrations about the Nigerian. He is like a banshee wailing against the failings of power when his belly is empty; when he is not within the circle of influence and when the holder of power is not his “religious or ethnic brother”. As soon as he is fed; his insecurities and sentiments catered to, he swears an oath of perpetual silence. And sometimes, he becomes an advocate of what he once protested against.

The hypocrisy of the Nigerian runs deep like still waters. At the height of Boko Haram killings in 2014, the Northern Elders Forum threatened President Goodluck Jonathan. It “ordered” Jonathan to secure the release of the Chibok girls by October 2014 or shelve his ambition of seeking re-election. This was a group of statesmen “speaking truth to power” when it was convenient to do so.

This forum publicly excoriated Jonathan saying, a “lack of a strong will at the level of the presidency, deep-seated corruption, incompetence in government and in the management of security challenges” was giving oomph to the crisis. What has changed?

In July 2018, the US Council on Foreign Relations said it had documented about 20,000 deaths since Buhari became president.  This number of deaths is higher than that of the Republic of Congo Civil War of 1997.

In November 2018, more than 120 soldiers were massacred by Islamic State in West Africa and about 150 reported missing in Borno state – the highest number of combatant deaths in a single bout since the Nigerian Civil War of 1967. And many more soldiers have been killed since November.

In 2016, Zamfara killings gained notoriety, but three years after, the savagery pushes farther into the entrails of the state. There have been more deaths and kidnappings. Violence has also taken over the roads Katsina, Kaduna and Kano. It is a sheer surrender to suicide to travel some roads of the northwest and of the northeast.

But in all of these, President Buhari is spared a blizzard of criticisms, protests and call-outs by people whose voice once pierced the ears remonstrating Jonathan for being “clueless”.  In fact, some persons who are directly affected by the killings are only a “little pissed” with Mr President.

Really, it is clear now that not all the fusillade of attacks against Jonathan was because he was “clueless”, but because he came from a section of the country that is considered “insignificant” and worshipped differently. And because, as I said earlier, some persons were not within the circle of influence at the time and were not “chopping” from the table.

Sadly, Mr President is exempted as an excusable party to incompetence by people who should ordinarily keep him on his toes and make him bend his back to the wheel.

Incompetence deserves dispassionate outrage; it does not discriminate between religions or ethnicity. Everyone is a victim.

Mr President must act to stop the killings now. Enough of the scripted responses to massacres. It has always been one response to every crisis, “…We are doing our best….” And leaving the country at the time citizens are mourning shows the president is not very attuned to this issue. Act now, Mr President! 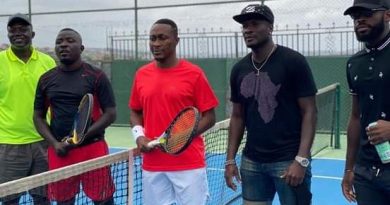 Super Falcons star, Asisat Oshoala, may have all the money she wants and good international outing that has not taken