The number of schools in which the programme operates is given as 49,837 public schools across Nigeria and is believed to reach 9,300,842 students.

If 9 million children are being fed on a daily basis, why does it appear like this programme is not in operation at all? The population of children being fed is large enough for the programme to be easily noticeable. The 26 states wherein the programme is functional are not listed on any public source.

Across Nigeria, few report having seen a Feeding Programme ongoing. There must be either a falsification of the statistics or the government is being misled by those benefiting financially from the programme.

The financial implications of the programme is that it is run at 19 US cents which at the present exchange rate would be 69 naira per student. At 9,300,892 students, the total would be 645,016,860naira for the running of the School Feeding Programme.

These statistics are in doubt because a programme that uses this workforce and demands so much agricultural produce to run would be more prominent than it presently is. The visibility of School Feeding Programme is very poor with an independent survey reflecting that most schools are not partaking in the programme and where they are only few classes in the entire school are actually enjoying daily feeding.

The programme is supposedly operational in 26 states with a total of 36 possible and this means that since the government plans to expand the programme across Nigeria and make it the biggest school feeding programme in Africa, the programme may still need more of state funds than is presently being used to fund it in order to reach the vision of expansion the government intends.

The concerns are also that if such a programme is in operation in the scale of which the statistics reflect, is it advisable when the financial implication is considered? Does Nigeria need to expend resources on daily feeding of students when such resources are best put into other use?

Is the programme integral to national development for a country where the statistics show high level of poverty, child mortality rates, poor healthcare, lack of infrastructure and motorable roads, poor power supply and massive unemployment?

The supporters of the National Homegrown School Feeding Programme claim that it would reduce malnutrition as malnutrition stands in the way of academic assimilation. This argument does not take into account the sustainability of the programme. Can we actually sustain School Feeding Programme continually for several years as the need for the programme is daily? Can Nigeria continue to shoulder the costs of this programme alongside others such as TraderMoni while at the same time carrying out infrastructural development conveniently?

There is the argument that the programme will aid school enrollment which has not been true from available statistics so far with more than 10million children still out of school in a statistical study done by the UNICEF United Nations Child Education Fund. The high numbers still out of school after the launch of the School Feeding Programme lends credence to the possibility it is not run at the scale which is being claimed by the government.

There is the concern that in the North of Nigeria among the Almajiris who walk around daily in order to be fed. The way to get them attracted to school is food. This seems to be the strongest point of the proponents of the School Feeding Programme. However, the cause of malnutrition must be solved and not hunger or malnutrition itself. The need to eat is recurrent and if the cause of lack of food to eat is not addressed, no single meal can stop hunger. It comes again.

Malnutrition is a deep-root problem that needs to be pulled out completely. A child will always be deficient on daily requirements when his Parents are poor. If that poverty is not addressed with Nigeria having achieved the status of poverty capital in the world, hunger will always exist.

The proponents of the School Feeding programme also posit that it encourages development of local agriculture(which would have been a correct argument if the NHSP actually exists in the scale of which the government claims) while at the same time claiming the programme encourages local artisans and cooks.

Of course, the programme has its beneficiaries but permanence must be considered. When or if it finally becomes impossible to continue the School Feeding Programme or the government decides to shelf it, these beneficiaries would go back to their previous state of lack. Children will become hungry again and the cooks would go back to being unemployed. Should Nigeria not then consider other alternate investment and programmes to run with her available resources?

The focus of a forward looking government should be rooted in permanent and far-reaching development that can produce far better value in the long term than in populist policies like the School Feeding Programme which once it is discontinued disappears without a trace. Many have even failed to consider the logistics and the potential for corruption involved in running the programme. It is a programme probe to use in siphoning government funds without accountability. Tracking food and its supply to schools on daily basis for a duration of time is almost impossible.

Would it not be better if government focuses more on other areas such as power supply and distribution which when rectified will immediately open up Nigeria to investments and equal creation of more employment opportunities? The welfare of people in matters such as feeding should be the function of parents through the wages from their employment.

Several other countries in the world with better wage rates and better welfare schemes also running School Feeding Programmes but for these countries, their important goals are not that of Nigeria where there is an urgent need to address long term economic issues. The School Feeding programme is also popular in small countries across West Africa that have a far lesser population to that of Nigeria.

When a large number of people are still unemployed, feeding their children would be of no real value. When Healthcare is still non-existent in some parts or too exorbitant, feeding school children with so much is not advisable. When Nigeria still has the poorest defecation system thereby creating further health concerns and possibility of disease outbreak, School Feeding programmes may not be advisable at the cost it is being run. Feeding school children is desirable, but for Nigeria, is it next? 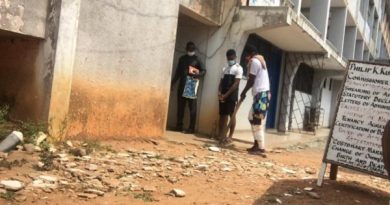