I remember the first time I would ever lose my property to a thief. It was during my 100 level days as an occupant of Mellanby Hall in one of the rooms located at a ground floor popularly called ‘Dungeon’. I never really got a good understanding of what was meant by the word ‘Dungeon’, as I always thought it was simply all about its usual, maddening swarm of hungry mosquitoes and nauseating waves of sickening smells which I experienced upon my resumption as a fresher. I, however, later got a true taste of what Dungeon really is.

It was during a period of exams, on a particular night which turned out unfortunate while I and my roommates were asleep, that a tragedy struck. It was a theft. I was a victim, together with one of my roommates. We woke up only to realise that a thief had stealthily stolen two phones through an opening in the balcony door. It must be understood that the opening was as a result of broken glass on a specific area on the door. In fact, the opening had been there long before I was admitted as a student let alone allocated the room; yet, nothing was done about it even throughout our stay in that room, despite complaints lodged.

Anyway, that story is an occurrence that is gone already even though its memory remains indelible like a sword scar.

Nonetheless, I must state that it is quite disappointing to say, series of theft cases were subsequently recorded in the hall even after the ill-fated experience that I and my roommates had, as there still was no significant measures to curtail the security anomaly. More disappointingly, some thieves who were at times caught by us, students, were often non-students, outsiders— guys from Agbowó and other neighbouring areas. And most disappointingly, thieves who were lucky enough to escape the students’ eagle eyes (it is unbelievable to say) would pass through the residential hall’s gate and, ultimately, through any one of the campus gates as well. So bad and sad.

For the few years I have spent as an undergraduate in the University of Ibadan, needless to say I have had constant reasons to hold on firmly to the claim that the security system of the school is rather better called ‘insecurity cease-term’, a stellar parody of water in a sieve. There is no doubting that the various, so-called gates and checkpoints in the school are but a grotesque travesty of what security should truly be. The security operatives of UI, popularly called Abẹfẹ́lẹ́, also represent a metaphor of a smaller instance of the Nigerian Police Force which has been apparently drenched in rot familiarly for so long a time.

I mean, how else does one describe the situation where anybody can come in and go out of the campus without being checked at all? Or how does one describe the locust-like influx of thieves and beggars threatening the needed sanity and comfort amongst the students? What about cases where one, two or more beggars would suddenly enter a class while a lecture is going on? What more befitting description can be used to explain all these security blots, if not the word dysfunctional?

As a matter of fact, there has been a recent case of theft allegedly involving an ‘Abẹfẹ́lẹ́’ security operative of UI. The case, whose victim was a Distance Learning student of U.I., came about on Tuesday, 26th March. What actually happened, as explained by the victim, was that he was at the Distance Learning Centre for an exam slated for 10:00 a.m. and he had with him a bag containing his phone, laptop and some other valuable items.

So, at the point of entry for the exam, he had to keep the bag with the security guards (a man and a woman) on duty and he particularly disclosed the items inside the bag to the security man especially so that he could be sure of a closer watch on his belongings. However, to the DLC students’ shock, after returning from the exam hall, he could not find his belongings again. Even ironically, the security man in whom he had confided told him to begin searching for his bag himself. Parody. Irony. Security disgrace in the ivory tower.

This particular occurrence— and many others like it— is a clear pointer to the fact that security is a joke in the University of Ibadan. As a consequence, the whole security unit of the school, to say the least, is also nothing but a finless shoal of jokers. If the supposed security guards of the so-famed first and best university in Nigeria cannot be trusted beyond a doubt, how then can any student be confident of the safety of his/her life and property within the campus?

As a matter of urgency, the university management must see this sickness in security as soon as possible. This definitely is not the first time something will be written about this issue of frail security and, for this reason, it is crystal-clear that security issues have long been one of the many festering sores in the system, crying for a swift check.

There is a dire need for a radical overhaul of the security system. Discipline and a good sense of duty seem to be missing, as observed in the lackadaisical attitude of the Abẹfẹ́lẹ́. Indeed, it is obvious that many of the security operatives in the university are either not well trained or not adequately monitored towards ensuring that they execute what they have been trained for. It is high time the university management upped the ante of the school’s security system.

Even if our freedom of speech is already muffled, should our fundamental human right to life and property be smothered as well? 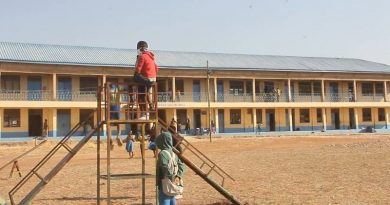