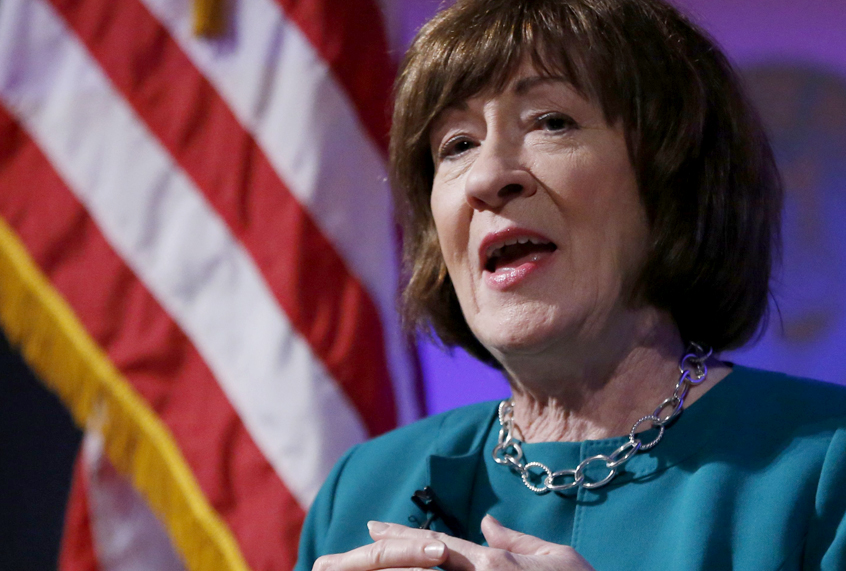 Republican Sen. Susan Collins of Maine, who has consistently positioned herself as a moderate and advocate for women’s rights, has a new Republican challenger as she approaches a 2020 reelection race in what is likely to be one of the more competitive seats in a year with a difficult map for Democrats.

Derek Levasseur, a right-wing blogger and construction worker, formally announced his campaign to unseat the four-term senator in the 2020 election cycle during a press conference Sunday. The political novice is the second Republican to publicly announce he plans to challenge Collins during next year’s primary.

“I’m not running against Sen. Collins out of resentment,” Levasseur said at the press conference. “I’m running for the people ― for common people.”

Levasseur, in the opening lines of his speech, addressed a 2012 incident in which he was arrested and charged with misdemeanor domestic violence assault after a fight during his wedding reception. He claimed he was defending his then-15-year-old daughter from the “inappropriate behavior of two men.”

“In the process of doing the right thing, I made some mistakes along the way,” Levasseur said. “That situation has been rectified. My family has moved on.”

He does not have a criminal record after complying with the terms of a one-year deferred disposition on several charges, according to The Bangor Daily News. Levasseur, who was a police officer at the time, was reportedly put on leave. He eventually left the position and gave up his police certification in 2013, the local Maine newspaper reported.

Levasseur first announced his candidacy in a March 19 Facebook post, in which he argued that Collins, who has served in the upper chamber since 1997, had served “long enough.”

It is “time for new ideas and less grandstanding,” he wrote. “I am a common man, with common sense! We are tired of the elite playing politics when they get elected and forgetting the common person they represent.”

Levasseur describes himself as a “proud constitutional conservative” and a Second Amendment supporter, who is “not going to bow down to the left’s agenda!” on his Facebook page. He says he will fight for “Democrats, independents and Republicans that hold these values.”

“I love my country and every opportunity we have as American People,” Levasseur wrote on the biographical section of his Facebook page. “I am using my voice due to the massive changes in our political climate and how often we are lied to by news groups in the mainstream media. I want to leave this world with the chance for my children, grandchildren and so forth to be able to leave peaceably. I also want them to know that I fought in every way I could to ensure that.”

Collins, the most senior Republican woman in the Senate, revealed in January that while she intends to run for a fifth term, she will not make a final decision until closer to 2020. Interest in unseating the Republican lawmaker, who is known for transcending party lines, surged last October after she voted to confirm Supreme Court Justice Brett Kavanaugh, providing a crucial swing vote that helped shift the ideological balance of the nation’s highest court for decades. Her decision to cast a critical vote to confirm President Donald Trump’s appointee, despite decades-old sexual misconduct allegations, came under intense scrutiny from her progressive constituents, who launched a unique crowdfunding campaign to fund her eventual Democratic opponent in 2020. The liberal activists raised $3 million to oppose Collins — a significant sum for a political race in small state.

The Maine senator also drew backlash for her December 2017 decision to support the Republican tax bill, which repealed the Affordable Care Act’s individual mandate, leaving 13 million fewer Americans without health insurance and increasing premiums by 10 percent. No Democrat has declaratively said they will take on Collins, although there has been speculation about several potential contenders. Whomever emerges as the Democratic nominee to challenge her already has millions of dollars in donations ready to be transferred to his or her campaign.

Collins, who occasionally defies her party by siding with Democrats, voted last month to block Trump’s declaration of a national emergency in order to seize funding to build his long-promised wall along the U.S.-Mexico border.

Levasseur on Sunday praised Collins as a “constitutional scholar” and vowed never to smear her during his campaign.

“I’m not the enemy of the honorable senator, who has served Maine with her own convictions for the past 22 years,” Levasseur said. “We focus too much on what we dislike about others, and I’m not going to do that.”

He said that although he was “being labeled as a Trumpian candidate,” he is, in fact, the “the people’s candidate.”

He lamented that undocumented immigrants, which he called “illegals,” are provided “free lawyers” while fighting for protected status in the U.S. while “the Mulders are not.”

“These situations have been happening way too long,” he said. “We need to elect people with common sense for sensible immigration reform.”

Levasseur railed against the so-called “elites,” saying he believes the Second Amendment is “as important to fight a tyrannical government as it is to defend yourself.”

He has yet to file with the Federal Election Commission. Levasseur told the Bangor Daily News he plans to do so after he has raised $5,000 toward his campaign. It is unclear if he reached that amount as of this writing.

Max Linn, a retired financial planner, also said in June last year that he plans to run against Collins in 2020. He announced his campaign minutes after a federal judge disqualified him from the 2018 Republican Senate primary in Maine, because he had not collected enough valid voter signatures. Linn’s nomination petition was reportedly found to include signatures of voters who no longer alive.

“Downton Abbey” is entirely unnecessary, and essential viewing for super-fans

Ngozi Okonjo- Iweala takes over the World Trade Organization on Monday amid hopes that she will spur the beleaguered body into addressing its towering challenges, including the pandemic -fuelled globa...
View on Facebook
·Share

The Northern Regional Minister, Hon. Salifu Saeed has advised the teeming youth of the country to take advantage of the

White women and the racist right: Marjorie Taylor Greene is not an aberration