Like Nigeria Algeria is rich in both human and natural resources (especially the black gold). Its population is estimated at more than 42 million souls. An Arab country in the northern edge of Africa it is reputed as the richest in the Maghrebian countries that comprise Egypt, Libya, Morocco and Tunisia. A close society with a semblance od democracy run by a ruthless gang led by the indisposed 82-year old President, Abdelaziz Bouteflika. The country is rich but Blacks are detested and treated like animals whereever and whenever they are found within her territory. Though President Bouteflika was born in Morocco his presidency’s diplomatic relationship with the equally rich Kingdom of Morocco is far from cordial.

From the capital city of Algiers to Constantine, Blida to Oran down to other major cities and towns the anti-Blacks sentiment is national and total. Many black Africans (especially from West Africa) that have had cause to visit the country on transit en route to Europe by sea or in search of elusive greener pastures had had harrowing experiences to narrate about how the Algerian security forces maltreated them. In a dehumanizing manner some of these adventurers had been killed or gone missing while others are still languishing in prisons! And worse of it all, the overzealous law-enforcement agents are doing all these abuses with glaring impunity.

President Bouteflika came to power in 1999. After the Algerian independence in 1962 Bouteflika was appointed Minister for Youth, Sports, and Tourism. And a year later he was made the Foreign Minister. A shrewd politician whose domineering methods and tactics are shrouded in mystery he remains till today, even on a wheel-chair, a strongman who laboured hard to bring stability and economic prosperity to his country and people.

During the Arab Spring uprising some years ago some entrenched dictators in neighbouring countries were swept away but  Bouteflika survived it as Algeria was spared the revolutionary trend. In Tunisia, Egypt and later Libya ferocious tyrants bit the dust and some fled to exile, others cooled their executive heels in prison and others were simply killed like rats on the streets. Ben Ali, Hosni Mubarak, the late Muammar Ghadaffi — do you still remember them and their rise and fall from power?

Like the Nigerian ‘re-elected’ President Muhammadu Buhari President Bouteflika is battling with presidential infirmity. He had suffered a devastating stroke way back in 2013 and since then he has been confined to a wheel-chair unable to stand on his feet or even communicate easily. Yet he rules! Like Buhari he often undergoes medical tourism abroad with little or no explanation as to his real health status. The latest of such medical sojourns overseas had seen him recently in Geneva, Switzerland, where he spent weeks taking good care of his fragile health.

His fourth mandate, ordinarily, would be elapsing next month of April. But even while on a hospital bed obviously oblivious of happenings around the world Bouteflika had, through one of his cronies, deposited his candidacy for a fifth consecutive term! However, this time, majority of the hitherto silent and docile Algerians have had enough. And they have been demonstrating, week after week, in their millions, on the streets, for a system change in the country. They are united in their vociferous ‘No’ to a fifth inordinate term for an old, sick and tired man on a wheel-chair.

As the unprecedented spontaneous pressure mounted on the streets in many towns and cities (including the hitherto impregnable Algiers) Bouteflika came back home from Geneva recently and announced that he would no longer be going for a fifth term annulling the presidential election scheduled for next month and decreeing that a National consultative Conference, one charged with the onerous task of writing a new constitution and proposing a new way forward for the country, would be inaugurated in due course.

Meanwhile as these proposed events are taking place the status quo would be maintained! That is, in other words, saying no to a fifth mandate but prolonging the current fourth indefinitely. The opposition on the streets had summarily rejected the presidential offer as a ruse and piled up the pressure last Friday with a monstrous show of force on the streets. Of course the embattled presidency had tried to buy time and suffocate the mass movement that could well metamorphose into a revolution.

For the past two decades Bouteflika has ruled Algeria like a glorified monarch with little or no opposition. Though the country is never a kingdom like Morocco the man had deftly used a network of mafians, crooks, goons and family to maintain a strong hold on the country. A veteran venerated politician with a sordid past Bouteflika was seen as a patriot by a majority of his compatriots before now. He brooked no internal or external interference in his country’s affairs even as his country, like China, is not interested in the national affairs of other countries.

A Francophone country that speaks more Arab than French Algerians are very proud of their national heritage. They hardly travel out. An acquaintance from Togo who spent about three years in the country once told me that of all the years he spent there he never one day witnessed rain falling! Algeria is indeed a ‘special’ nation in some ways including drought year in year out!

The people-power echoes on the streets of Algiers and other cities indicated that ‘King’ Bouteflika’s days in power are numbered. Ex-dictators Ben Ali, Mubarak and the late Ghaddafi tried to quell the nascent revolution on the streets of Tunis, Cairo and Benghazi respectively but the people’s power triumphed over entrenched dictatorships. Today it is no longer a question of if President  Bouteflika would survive the ‘assault’ by the masses out to effect a popular revolutionary civil ‘coup’ against the establishment but when his army of gerontocrats, killers and corrupt coterie of businessmen would surrender power on the masses’ terms.

From the look of things Algeria has changed for good. The years, months and days of state terror and/or terrorism have devolved. Today even the military tanks and the secret police in a police state that served as intimidatory state ruling tools could no longer be relied upon to contain the explosive situation. We hope that the news from Algiers would serve as a lesson to the despots in sub-Saharan Africa — the Paul Biyas, Idris Derby Itnos, Sassou Nguessos and Obiang Mbasogos. Democracy in its unadulterated form must prevail in Algiers, Yaounde, N’djamena, Brazzaville and Malabo.

A video image of the mass protests online revealed an organized pattern, pacific processions spanning kilometres with almost every Algerian involved! Men, women, boys, girls, the old and young, all united by one objective: toppling peacefully the current old order and installing a new one in its stead. We express our social solidarity with the Algerians and urge all men of goodwill around the world to help see through the change being popularly demanded on the streets.

The Algerian people are fed up with Bouteflika and his gang. And all they wanted for now is a regime change. The cabal running the Algerian national affair on behalf of the indisposed near-senile Bouteflika must be made to beat a hasty retreat for peace to continue reigning. Otherwise a bloody revolution is inevitable sooner than later.

As the mass protests hit back the streets last weekend the people of all ages were overheard chanting in unison: Bouteflika, dehors! (Bouteflika, Out!) We join them in announcing the imminent arrival of a new dawn in Algiers and elsewhere in Algeria. 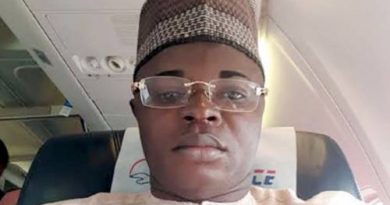 COVID-19 And The Assault Against Freedom By Emmanuel Umohinyang