Rotimi Akeredolu, Governor of Ondo State, has asked the people of Akure to tender an apology to Olutayo Alasoadura, the senator representing Ondo Central district, for his loss to secure a second term.

Akeredolu said he was surprised that the indigenes of the town did not vote for Alasoadura in the just concluded National Assembly election.

Alasoadura got the automatic return ticket of the All Progressives Congress (APC) to contest in the election, but lost to Ayo Akinyelure of the Peoples Democratic Party (PDP).

Akinyelure had polled 67,994 votes to defeat the sitting Senator, who polled 58,092 votes.

The Governor, who spoke at a ‘Thank You’ visit to Akure North Local Council Area of Ondo State, said Alasoadura should have been returned to the Senate for a second term because he “performed well for his people”.

Akeredolu also expressed sadness that his party has not always done well in Akure in terms of voting strength.

“We participated in two elections or did I lie? The first election we did, I will say it the way I noticed it. Akure people, you did not do well to our party (APC) in the first election. You might have your reasons but I want to tell us in Akure that either we like it or not, we must apologise to Senator Tayo Alasoadura as we did not do well to him.

“He was a good representation of Akure and he did so well. I have begged him not to be angry with his people, because I also believe everything is always working for good. And it is only God that knows what he has for Senator Alasoadura, and whatever he wants for him, you all should benefit from it.

“I can say it that he (Alasoadura) has represented Akure people very well, and at the time he needed all of us, we abandoned him. Let us tell ourselves the truth. We all owe him an apology, but we will have to move on from there and he has promised to forget everything and also move on.”

It was gathered that the tour of Akeredolu to the 18 local council areas of the state is “an underground work” in preparation for the formal announcement of his second term governorship ambition. 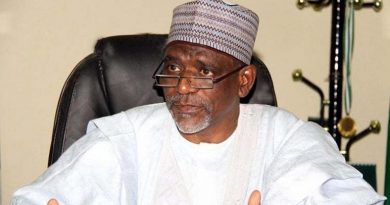 President Akufo-Addo says he is humbled to be re-elected to serve the people of Ghana for another four-year term. He

Abeka: Owners of house in middle of road demand full compensation before demolition