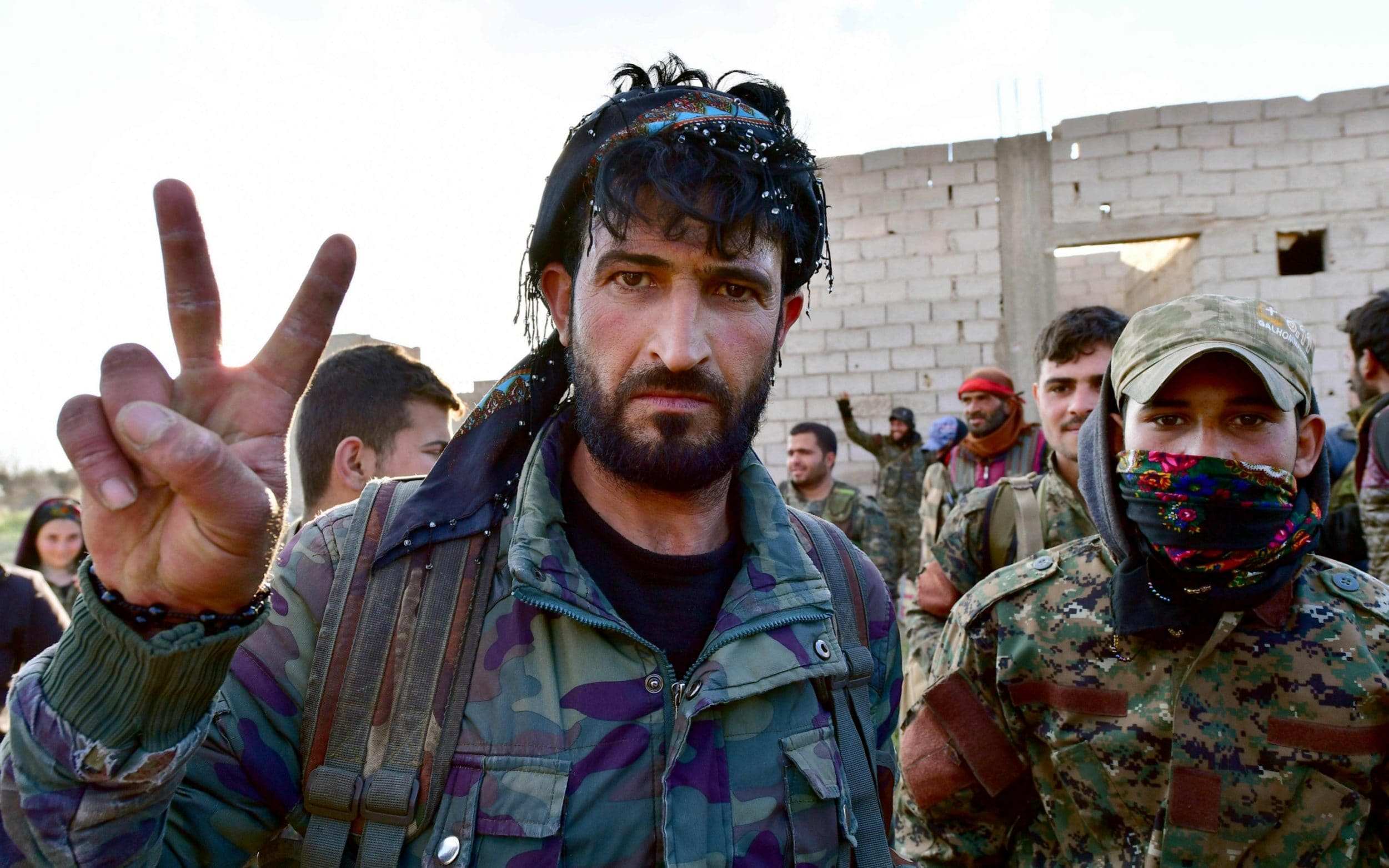 The last pocket of Islamic State territory has fallen, Western-backed Syrian Democratic Forces (SDF) said on Saturday, marking the end of the group’s “caliphate” four-and-a-half years after it was declared.

“Total elimination of (the) so-called caliphate”, Mustafa Bali, the SDF spokesman, wrote on Twitter. “The military victory against Daesh has been accomplished.”

The SDF had Islamic State of Iraq and the Levant (Isil) cornered in a patch of land smaller than one-mile-square in the eastern Syrian village of Baghuz, before finally dealing them defeat.

A small number of Isil fighters, most of them foreign, refused to surrender and fought to the last.

Syrian Democratic Forces declare total elimination of so-called caliphate and %100 territorial defeat of ISIS. On this unique day, we commemorate thousands of martyrs whose efforts made the victory possible. #SDFDefeatedISIS

An unfathomable number of people – mostly women and children related to Isil members – have streamed out of Baghuz in the past weeks.

The Kurdish-led SDF said its fighters were surprised by the amount of civilians – which totalled more than 50,000 – cooped up in the small area that has been squeezed smaller and smaller by intermittent military offensives.

For the last week, the SDF and US-led coalition has been pummeling the Baghuz pocket in the hope of bringing the battle to an end.

Syrians on social media criticised the coalition for its heavy use of air strikes, after graphic photographs emerged purporting to show the charred bodies of women and children, as well as piles of corpses littering Baghuz.

Isil had been given several chances by the SDF to evacuate out of safe passages. Those left at the end had rejected the offers and had effectively been using their families as human shields.

There is no accurate estimate of how many were killed in the final stand.

The battle took 1,737 days – four times longer than the liberation of western Europe from the Nazis. It took 100,000 bombs, two national armies, a band of militias, the might of the US, British and French air forces and a coalition of nearly 70 countries to defeat the jihadists.

During their height they controlled territory spanning two countries that was roughly the size of Britain, imposing a radical and unforgiving interpretation of Islam over nearly 10 million people.

Its leader, Abu Bakr al-Baghdadi, declared an end to modern countries and called on supporters to join their jihadist utopia.

Tens of thousands from all over the world came to live in the self-declared caliphate – the first in modern times.

Isil used their base in Syria and Iraq as launchpad for attacks around the globe, including the Paris attacks in 2015 which killed more than 130 people.

At the same time, they began terrorising those they ruled over, carrying out large-scale massacres and public executions.

While the battle may be over, questions still remain; such as the whereabouts of Baghdadi and the fate of a number of high-profile hostages including captured British journalist John Cantlie.

There are rumours Baghdadi could be hiding out in the Anbar desert in western Iraq.

While Isil has now lost all the urban territory they once held, it continues to have a presence in the desert of both Syria and Iraq.

Isil declared in an audio message from its spokesman this week that the group would not be weakened by any defeat in Baghuz and urged its followers across Syria to attack the SDF elsewhere in the country.

“Avenge the blood of your brothers and sisters.. set up the )explosive) devices and deploy the snipers,” said Abu Hassan al-Mujahir.

The SDF too has warned the end of the physical caliphate did not mark the end of Isil.

Isil sleeper cells have stepped up attacks on SDF forces in recent weeks, attacking areas where once they ruled.

Local Syrian Kurdish and Arab forces fear a return of Isil once the US withdraws most of its 2,000 forces in April.

US intelligence agencies have warned that the jihadists would likely resurge in Syria within six to 12 months and regain limited territory if sustained pressure is not maintained.

Gen. Joseph Votel, who oversees US military operations in the Middle East as commander of Central Command, told Congress earlier this month that extremism in Iraq and Syria is a “generational problem.”

Indeed it is not one that will likely be solved quickly.

Tens of thousands of Isil suspects and their families are in prisons and camps in Iraq and Syria. Many have not been formally accused, others have been deemed guilty by association.

It was in overcrowded camps like these that Baghdadi and a cadre of like-minded extremists formed a group that would later morph into Isil.

The last to leave the final holdout expressed few regrets about how their jihadist project turned out, many continuing to pledge allegiance to a ruined caliphate they had already reconciled to losing.

“Don’t think we are surrendering,” one woman leaving Baghuz told the Telegraph, “we are saving ourselves to rise again.”

My father loved epic solo road trips. But for his final journey, we all came along

An Accra-based non-governmental organization, Taimako Foundation on Sunday 27th December, 2020 donated some items to children at the Christ Faith