You must understand that some things do not happen naturally here. Protests, in particular, are not organic or “an act of God”, at least not now; there is usually a “mighty hand” in the shadows pulling the strings.

Unlike in the past, when men of good conscience like Gani Fawehinmi, Wole Soyinka, Chima Ubani, Richard Akinnola and Femi Falana, led mass movements against tyranny on principle, protests here are now monetised and deployed to achieve the insular ends of the “backer”. In fact, they form the core part of planning for any political activity. And there is a handsome budget for them. For example, if a certain “big shot” senses that the EFCC dragnet is closing in, he finances a protest through “groups” to demand, ‘leave our daddy alone’; ‘EFCC go after other looters’.

I recall in May 2014 when a mercenary “civil society” group protested against the Bring-Back-Our-Girls group at the Unity Fountain in Abuja and sent in its thugs to disrupt the sit-in. I also recall other protests after 2014, solidarising with the government and demanding the expulsion of perceived enemies.  The truth is, the government is the biggest enabler of fraudulent protests. And it is also the greatest danger to civil advocacy.

Have you wondered why some civil society groups that were ferocious before 2015 suddenly appear to have a canine extraction? Of course, you guessed right.

Really, some of these civil society groups survive on “protest money” and other largesse from politicians. As a matter of fact, most of them are set up specifically for this purpose. Sadly, organising protests is now a political strategy through which corrupt money flows to the gatekeepers of society.

Although this phenomenon is not new, it has metamorphosed into a grandiose and prodigal enterprise since 2012. Organising protests has become a big business.  You see a group organise a protest against a particular issue, and then hold another one in favour of it afterwards. It all depends on who is paying the bigger bucks.

Surprisingly, groups which claim to be non-partisan or politically neutral are bottom-deep in the business of organising protests for money.

Recent allegations by Deji Adeyanju, a former stakeholder in the Our-Mumu-Don-Do group, against the honcho of the movement, accent this style of “chop, chop activism”.

Sometimes, being politically neutral or non-aligned is not about having integrity, but about protecting the belly so as to “chop” from both the good, the bad and the ugly.

However, the role of civil society groups cannot be obviated or diminished.  There are still a good number of genuine groups. In fact, we owe our democracy to some activists and leaders of civic groups who even in the fiery furnace of Abacha stood like Shadrach, Meshach and Abednego. Also, protests are an instrument for checking abusive governments. This tool cannot be retired because of a few rotten eggs.

But the civil society must save itself from this moral declension. I think, it is time to self-regulate. 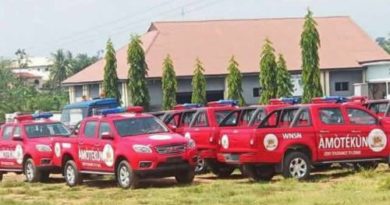 An Accra-based non-governmental organization, Taimako Foundation on Sunday 27th December, 2020 donated some items to children at the Christ Faith