For the past few days now, Nigeria has been thrown into a mournful mood. From the return of Buhari as President to the tragic death of Prof. Pious Adesanmi. No sooner had we recovered from these pathetic occurrences than we have been confronted with an avalanche of other tragedies. My prayers and heartrending condolences are with the families of young pupils who are victims of the Ita faaji and the Lagos Island building collapse. Yet again, our children, the future of our dear country, have been sacrificed on the altar ineptitude and crass irresponsibility of the Nigerian ruling elite.

For the records, the categories of persons who are being mourned in the past few days did not meet their deaths by sheer force of fate or destiny, they were killed and made victims of systemic failure. And there have been many more who have died under worse circumstances. Scores of promising Nigerians have lost their lives to our poor health system. LUTH and LASUTH are both embarrassing eyesores. Both hospitals have been more magnificent in taking lives than efficient in saving them. Our roads are death traps with potholes already assuming the size of very large drainages.

Without losing sight of subject of discourse, Bola Tinubu, in his response to the recent tragic occurrences of collapse of buildings, advised the Lagos State government to fast-track the process of demolishing marked buildings. This statement would have hoodwinked the unsuspecting few into the false assumption that Tinubu’s statement was coming from the part of his heart that houses empathy for the victims of this tragedy. On the contrary, beneath the facade of sympathy lies his real intent, which is centred at attacking the livelihood of poor and hopeless Lagosians. This is not to say that I intend that government continues to indulge defective buildings. Not at all. However, can someone just help ask Tinubu whose responsibility it is to provide adequate shelter? Unlike Lateef Jakande whose administration built several low-cost housing and tertiary institutions, all of which are still in existence today, Tinubu and his proteges who succeeded him couldn’t build a single tertiary institution neither did they lay a foundation for low-cost housing.

What they have been doing instead has been to commercialise our universities as Fashola did with LASU in 2011. Fashola’s so-called low-cost housing remains till date unaffordable to an average Nigerian worker.

From Tinubu to the regime of Fashola and down to the administration of Ambode, the Lagos State government has rather been in the business of demolishing houses of poor Lagosians. Ambode in 2017 alone demolished several houses and market places, including Otodogbame, Ilubirin, Sabo and several others. These inhumane actions perpetrated by the government remain one of the worst humanitarian disasters witnessed in our country in recent times. Several persons were killed, while scores of others recorded unbearable property losses to the tune of millions. In all of this, government saw no reason to compensate persons it rendered homeless overnight and neither has it devised any initiative to compensate scores of others whose means of livelihood were permanently destroyed through the demolition of market places where our most vulnerable citizens are known to make a living.

As moribund as the Nigerian constitution may seem, it nevertheless spelt out some very cogent responsibilities of government to its citizens. Chapter 2 Section 14 of the Constitution stated unequivocally that security and welfare of the citizens shall be the exclusive responsibility of government. Proceeding to Section 16 Subsection 2d, it was boldly written that government shall provide good and adequate shelter for its citizsns.

This is the position of the Constitution. And now that Tinubu is proposing that government speed up the process of demolition, is he also proposing that government also provides alternative homes for persons who would become homeless? Is he also proposing that government begins building low-cost housing on a massive scale? A kind of housing in which an average worker that may soon be earning a paltry N30,000 minimum wage can conveniently afford? Lagos has always prided itself as the fifth largest economy in Africa with GDP higher than the economy of five neighbouring African countries put together. The government, in fact, recently announced a rise in GDP by a whopping sum of N32.99billion. This new development has placed the Lagos State economy far higher than that of 33 states combined.

It is therefore very expedient at this moment that we all rise as citizens to demand that this new rise in the GDP should henceforth be put to the construction of mass housing, funding/building of new hospitals of modern standards, building of schools of modern categories, modern transportation, roads and support for free health and free education at all levels. Lagos money should be put into such relevance rather than saving it in Tinubu’s private vault where some of it would find its way into bullion vans in the course of the next elections. 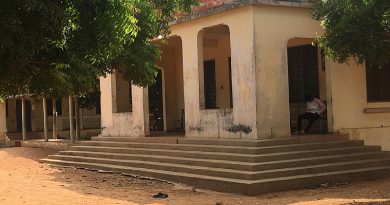